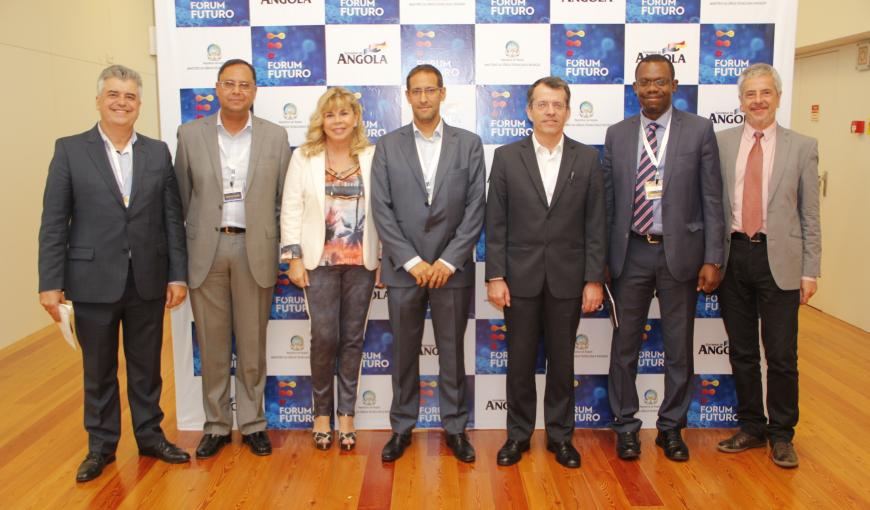 On January 31 and February 1, the Ministry of Science and Technology (MCT) of Angola held the first edition of the Future Forum in the capital Luanda. The theme of the event was the impact of science, technology and innovation on the growth and diversification of the Angolan economy, aiming to sensitizing political and civil society representatives to the importance of the CT&I industry in the country's sustainable development.

The general director of RNP, Nelson Simões, and the Operations and Engineering Director, Eduardo Grizendi, who at the time represented the board of the Latin American Cooperation of Advanced Networks (RedCLARA), attended de meeting after invitation of Angola MCT.

RNP was the highlight in one of the boards, which shared its experience of how an academic network can contribute to the National Science, Technology and Innovation System of its country.

The meeting was also attended by experts from Portugal, South Africa, Ivory Coast and Mozambique. One of the highlights was the presentation of the executive director of the Mozambique academic network, MoRENet, Lourino Chemane, about the implementation of infrastructure that already interconnects 49 educational and research institutions in the country.

“The balance was the clear understanding and commitment of institutions and national leaders to create an education and research network in Angola. Another important message was that investments in science and technology must be continuous, constant, and that the public leverages the private. That is, if there is no regularity in public investment, the private does not occur”, Nelson Simões says.

Also in the event, the Angola Cables telecommunication company announced the completion, in 2018, of the connection of the submarine optical cable South Atlantic Cable System (Sacs), between the cities of Fortaleza and Luanda. In addition to Sacs, which will guarantee the first high-capacity connection between Brazil and Africa, also expected for 2017, the release of Monet, another submarine cable financed by Angola Cables, in partnership with Google and Brazil's Algar Telecom, reinforcing the connections between Brazil and the United States and expanding the international exit of Angola.