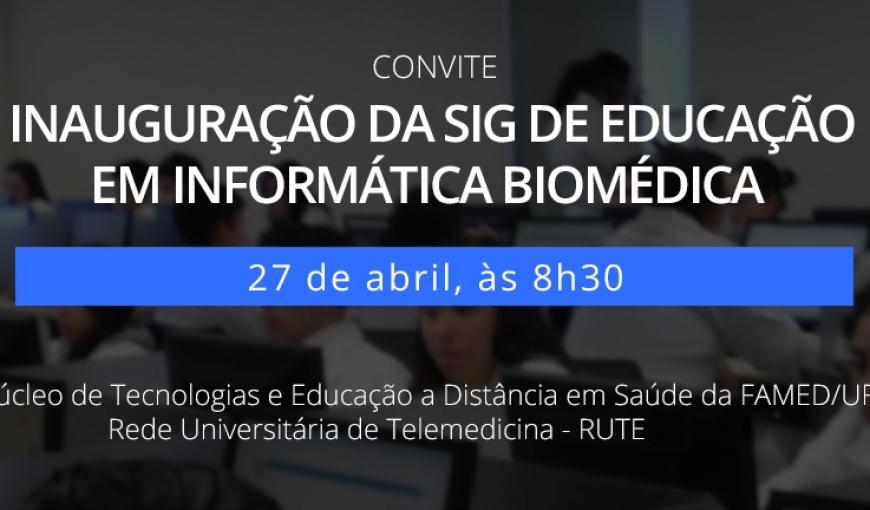 The Telemedicine University Network (Rute) sill start to count on a new Special Interest Group (SIG) in Education in Biomedical Informatics, for debates, case discussions and distance education, aimed at health professionals at different levels of training. On April 27, at 8:30 a.m., the first meeting of the group will be held, coordinated by the Nucleus of Technologies and Distance Education in Health of the School of Medicine of the Federal University of Ceará (Nuteds/UFC), with web conferencing broadcast open to the public.

The purpose of the new SIG is to promote debate and stimulate the development of digital competencies between professionals and students in the health area, for the appropriate use of Information and Communication Technologies (ICT). “Biomedical Informatics is a science of its own and a transdisciplinary area, still unknown to health professionals. It is necessary to teach the use of ICT for the treatment of complex, indeterminate and ethically important information”, says the Nuteds' general coordinator, Dr. Luiz Roberto de Oliveira, who mentioned as an example the Ministry of Health measure that requires implementation of electronic medical records in all units of the Unified Health System (SUS) in 2017.

The UFC Nucleus became part of the Telemedicine University Network in March of this year, when the idea of the new SIG arose and a proposal was sent for a Rute unit at the School of Medicine of the UFC, scheduled to open on May 11. “This is an important achievement, because it is the recognition of the effort that has been made by the Nucleus to promote actions in the field of health technologies, especially in terms of teaching and training professionals in this area”, emphasized Oliveira.

The first meeting of the SIG Education in Biomedical Informatics will be held by the RNP Web Conference service and broadcast nationally, with free access. Just enter as a guest, enter the name and access the virtual room. There, you can follow the discussions, view the content and participate in the debate. The target audience is the undergraduate, specialization students, residents, masters or Ph.D students, professors, researchers and health professionals of medium or higher level, both Medicine, Pharmacy, Dentistry, Social Work, Nursing, Psychology, Physiotherapy, Public Health and Informatics.

According to Nuteds/UFC, the centers of telemedicine of the federal universities of Pernambuco (UFPE), Rio Grande do Norte (UFRN), Minas Gerais (UFMG), Maranhão (UFMA), the state universities of Rio de Janeiro (Uerj), and Paulista Júlio Mesquista Filho (Unesp), The Bahia School of Medicine and Public Health, the University of São Paulo (USP) and the Medical School of Ribeirão Preto (FMRP) expressed interest in participating in the project.