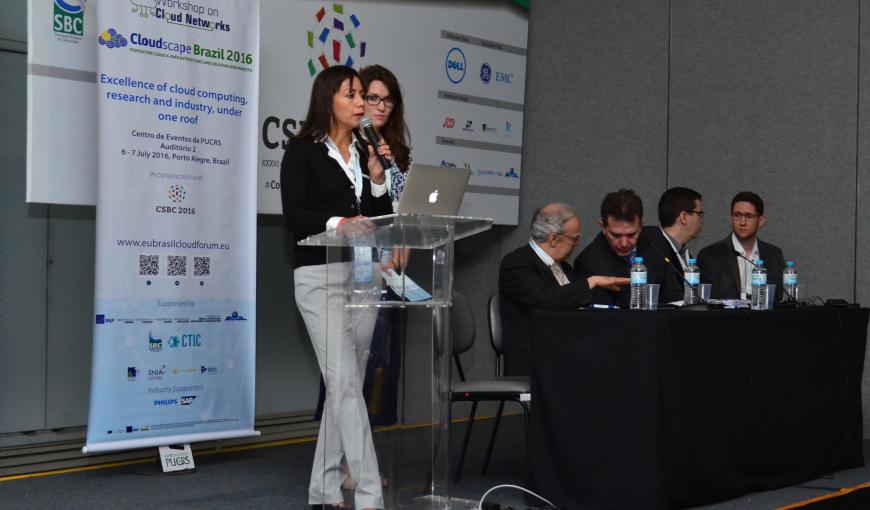 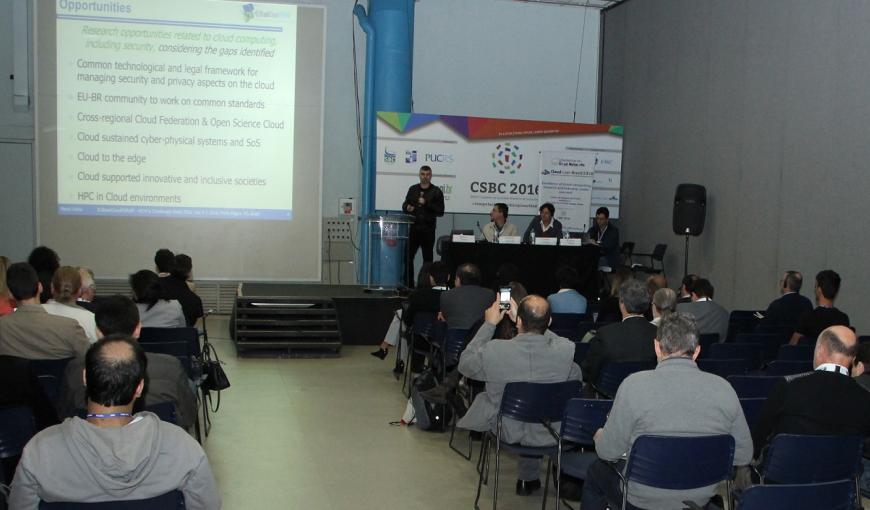 Between July 4th and 7th, the 2016 Brazilian Computer Society Conference (2016 CSBC) in the city of Porto Alegre, in the south of Brazil, promoted spaces for exchanges and discussions focused on 'Communication and Interdisciplinarity. The goal was to increase synergy in finding integrated solutions to emerging issues in the computer field in today's society. The CSBC also included satellite events, three of them promoted for the first time and with the support of RNP: testbed Fibre Workshop, Cloudscape Brazil and Workshop on Cloud Networks (WCN).

WCN and Cloudscape Brazil were held on July 6th and 7th, respectively, to present original research related to the challenges, solutions and techniques regarding cloud computing. The workshops were attended by representatives of the government, those of the business industry and the academia in Brazil and Europe, to address topics such as privacy, cloud data mobility and provider federations to the academia. The events were promoted by EUBrasilCloudForum, one of the projects of the 3rd Brazil-European Union Coordinated Call in Information and Communication Technology (ICT). This call is managed by CTIC/RNP with Ministry of Science, Technology, Innovations and Communications, on the Brazilian side, and the European Commission, in the EU.

In the opening panel, Brazilian coordinator of EUBrasilCloudForum, Priscilla Solis (photo 1), presented project results and plans, which is developing a research roadmap on cloud computing, focusing on the BR-EU relationship. From this study, government members from both sides will be able to assess new opportunities for topics for future cooperation. Afterwards, the director of the European Commission's Information Society in Brazil, Augusto de Albuquerque, reported on the Brazil-European Union cooperation history, stressing the interest of the commission in continuing its cooperation with Brazil. In turn, the secretary of the Information Technology Policy Department Maximiliano Martinhão reinforced the enthusiasm of the body to promote the next call, towards 5G, the Internet of Things and cloud computing. The opening panel was also attended by the director and the project coordinator of CTIC/RNP, Lisandro Granville and Wanderson Paim. They presented data on the implementation of projects approved in the 3rd BR-EU Coordinated Call.

One of the meetings highlighted the history of the BR-EU cooperation and coordinated calls. The director of the National Laboratory for Scientific Computing (LNCC), Augusto Gadelha recalled that in June 2009 he, Marylin Peixoto, Antenor and Michael Stanton (RNP R&D director) participated in the Advisory Group of the European Commission to convince them that Brazil could cooperate in ICT with the Europeans. After negotiations, the first call was launched in September 2010. The event also included the presentation of results of the projects selected in the 3rd BR-EU Coordinated Call and Fibre2. The latter was presented by RNP consultant Tiago Salmito, who highlighted the satisfactory amount of platform users and integration plans with other projects such as FUTEBOL and Bambu.

"The RNP played a key role in the event, as manager of EUBrasilCloudForum, and in the presentation of projects related to the theme, such as academic cloud and FIBRE. The dissemination of the results of projects and of the Brazil-European Union cooperation is essential to continued support and funding. Besides helping to promote interaction between Brazilian and European communities, it assists in the formation of new partnerships. I believe these meetings made clear ​​the commitment that the teams have demonstrated in the conduct of projects, "said the coordinator of CTIC/RNP.

The CEO of the Ponto BR Center for Information and Coordination (NIC.br), Demi Getschko, attended the session on challenges in cloud computing and spoke of the evolution of hardware and software technologies, together with advances in communication networks, culminating in what is known today as cloud computing. At the same meeting, the professor at the Federal University of Rio Grande do Sul (UFRGS), Philipe Navaux, stressed the importance of supercomputers, such as Titan and Santos Dumond, for running applications that require high throughput, such as weather forecasts, rocket launches routes and turbine performance. However, running this type of application in cloud environments was appointed as a trend and a challenge. Some cloud application examples were also highlighted in the speech of the Director of the EMC Research Center in Brazil, Karin Kreitman. For her, one of the promising applications is using the cloud to gather information from geo-located users, making it possible to identify preferences routes and mobility patterns in large urban centers.

At the sitting on Cloud Federation & Open Science Cloud, the RNP director of Services and Solutions, José Luiz Ribeiro Filho, presented the Academic Cloud project running in Brazil. The idea is for every education institution that is a member of the cloud to be able to contribute with resources to a shared computing infrastructure. He points out, however, that there are still many challenges, such as establishing legal parameters, data protection in exchange and storage and intercontinental connection.

The CTIC director highlighted, at the end of the event, how positive the opportunity of interacting with the 2016 CSBC was. “It was a wise decision, since presentations were made for the event audience, which gathered along with the workshop audience. In addition, an opportunity for European and Brazilian researchers partners to integrate with other researchers participating in the CSBC, was created", said Lisandro.

On July 5th, RNP held a workshop during the 2016 CSBC for those interested in operating the Fibre platform, a testing environment in Future Internet that facilitates learning in computer networks. According to RNP R&D coordinator, Gustavo Dias, testbed Fibre is offered as a platform for running network experiments and networking. “The target audience is researchers and Computer Networks teachers who can provide their students with the opportunity of testing theoretical concepts in practice, avoiding the line of use of network simulators or emulators," he said.

In the first part of the lesson, the main features of the testbed were presented, the geographical distribution of experimentation islands, the resources available on each island and the possibility of allocating free virtual machines for configuration, according to the user's needs. The workshop also outlined the future prospects of Fibre, including the implementation of new islands in the Bahia (UFBA) and Uberlândia (UFU) Federal Universities, the Pontifical Catholic University of Rio de Janeiro (PUC-Rio) and the University of the Republic Uruguay (Udelar). The next short course on Fibre will be held in Porto Alegre, September 27-30, during the 14th ERRC, event of the Regional Computer Networking School.