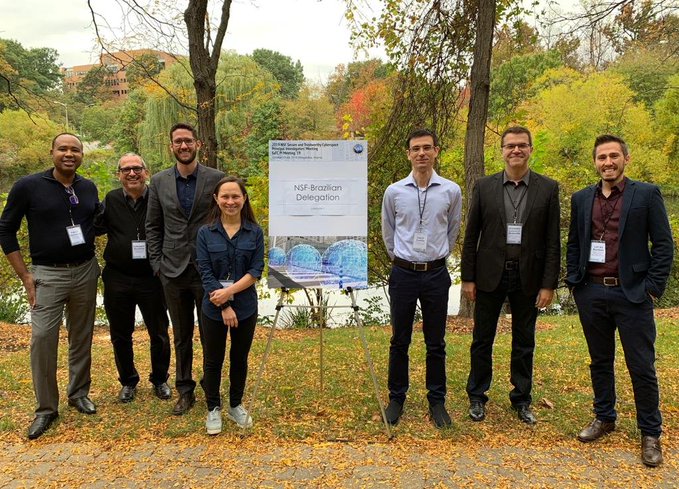 More than 500 researchers gathered in Washington (USA) for the biannual meeting of coordinators of Security projects from the National Science Foundation (NSF). Representatives of the five projects chosen by the Joined Call RNP-NSF in Cybernetic Security were in the event to introduce their final results.

According to the coordinator of Information and Communication Technology Center (CTIC), Wanderson Paim, the meeting was a great opportunity for Brazilian researchers to get closer to the American community of research in cybernetic security.

“The projects, in general, take advantage of the partnership between Brazilians and Americans to improve their researches and experiments, considering human and computing resources. Results are positive and allow, for instance, improvement in the quality of researches and their publications in conferences and journals of high prestige,” Wanderson declared. In addition, the cooperation allows researchers to take interuniversity exchange doctorate programs in American institutions of teaching with well-known worldwide researchers.

The Joined Call RNP-NSF was released in 2016 with the support of the Brazilian Department of Science, Technology, Innovations and Communications (MCTIC), and the aim of developing solutions for cybernetic security issues in the area of computer networks and Internet of Things.

One of the IoT projects, for instance, developed a study with the most popular 100 pieces of equipment of Internet of Things, including security cameras, lockers, thermostats and intelligent alarms.

The study assessed apps that are used together with these devices, which are usually installed in smartphones, and they found that at least 50% of them do not use encryption in transfers or storage of data.

In addition, 20% still use protocols publicly known as unsafe. Considering these and other statistics, most of the devices may be assessed as currently unsafe. These prospections are a worry if we consider the next Internet evolution, which aims to highly increase the use of devices (thing) connected to the Internet.

On one side, the IoT projects propose to train equipment of domestic networks to identify and block attacks. On the other side, they aim to improve security of apps with the devices. This shows that there are solutions varying from the assessment of the app code to the creation of specific rules that may be installed in household routers to allow only the traffic of data deemed safe and authentic based on intelligent devices that the users have at their homes.

Another project developed a test platform for security solutions. It focused on security issues in computer networks, such as increase of malicious activities in computer networks, which represents a great threat for users, considering mainly the attacks coordinated by robots (or bots). In addition, another great threat that was a project research target were the attacks to internet internal routes, which are usually performed to deviate data that would go to a certain server, by sending them to another malicious server.

Given the complexity in the reproduction and development of experiments and, as a consequence, of security solutions, the project increased a test network, including Brazilian institutions as part of a platform of tests of international security solutions.

The project has also developed solutions to assess the long-term impact of the strategies developed on the network routing efforts by operators and has taken initiatives to encourage the adoption of more effective security measurements of operators and public organizations responsible for network infrastructures.