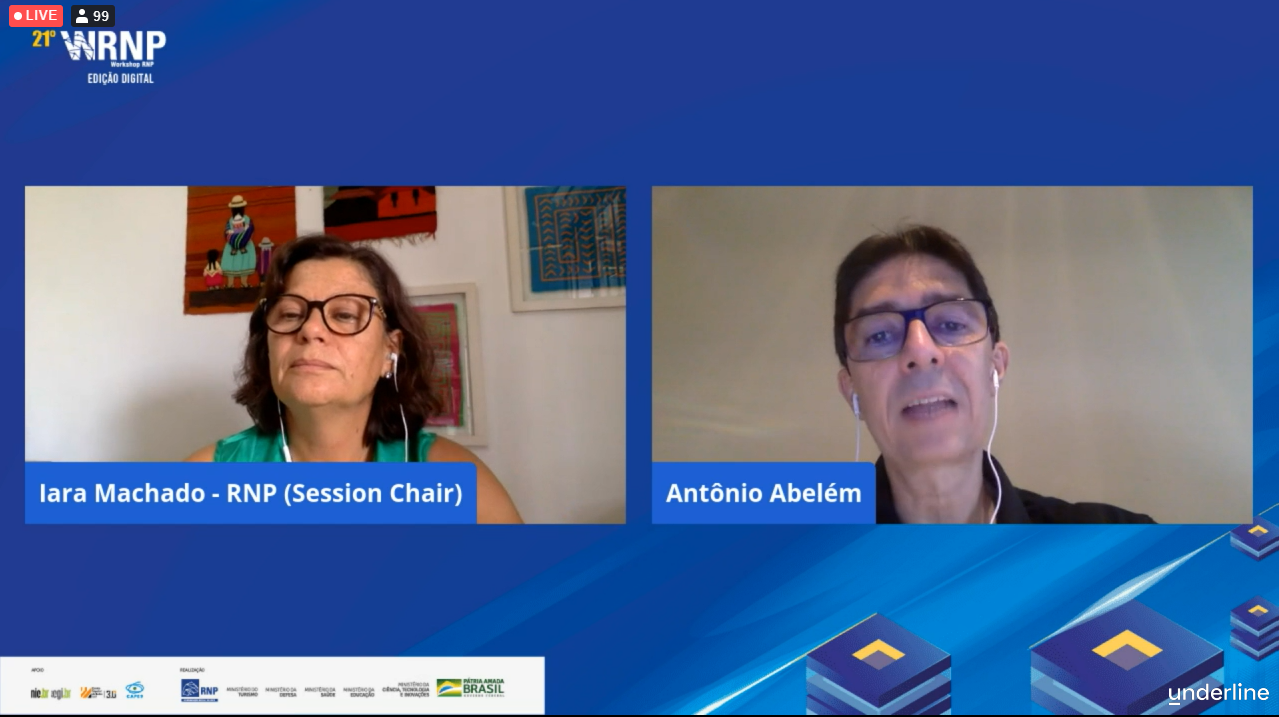 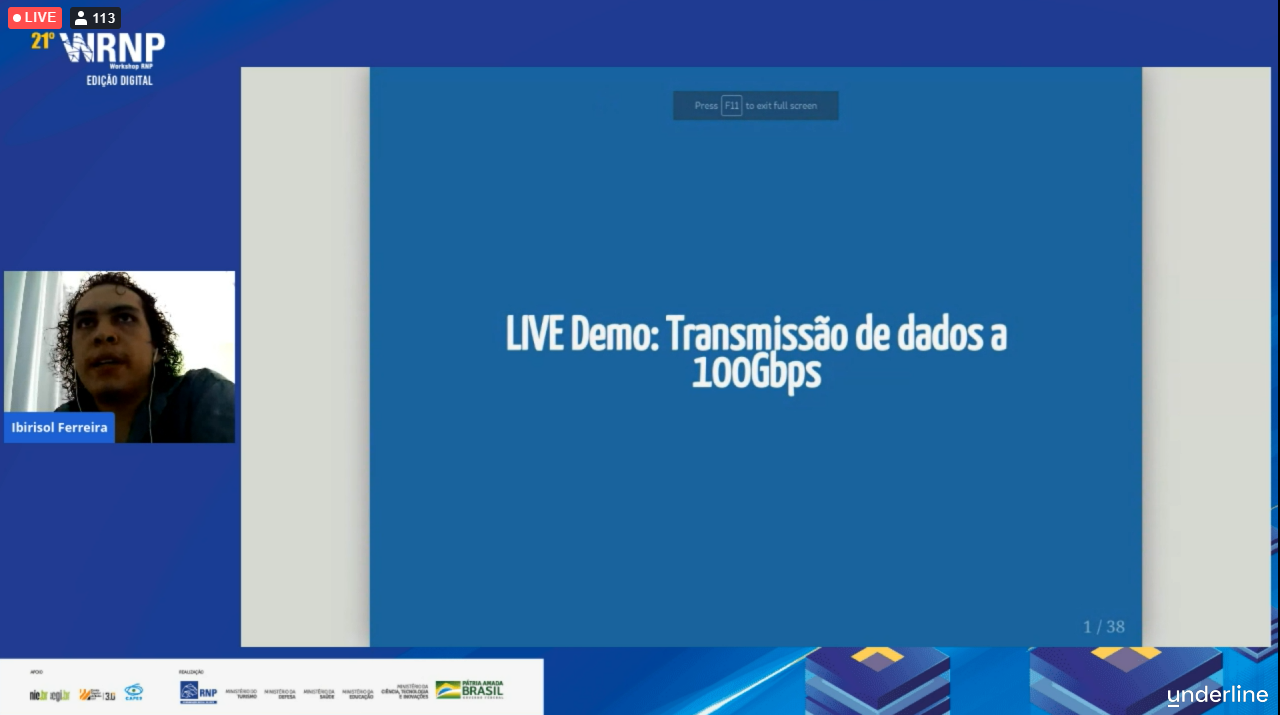 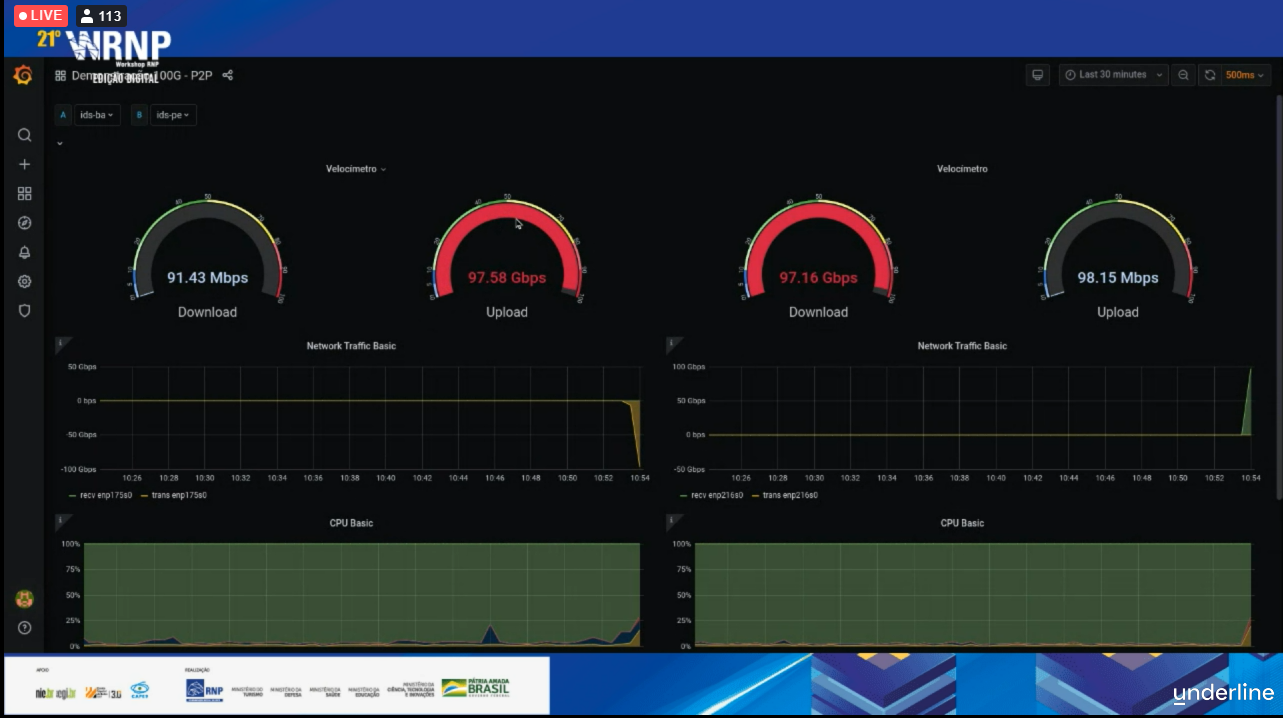 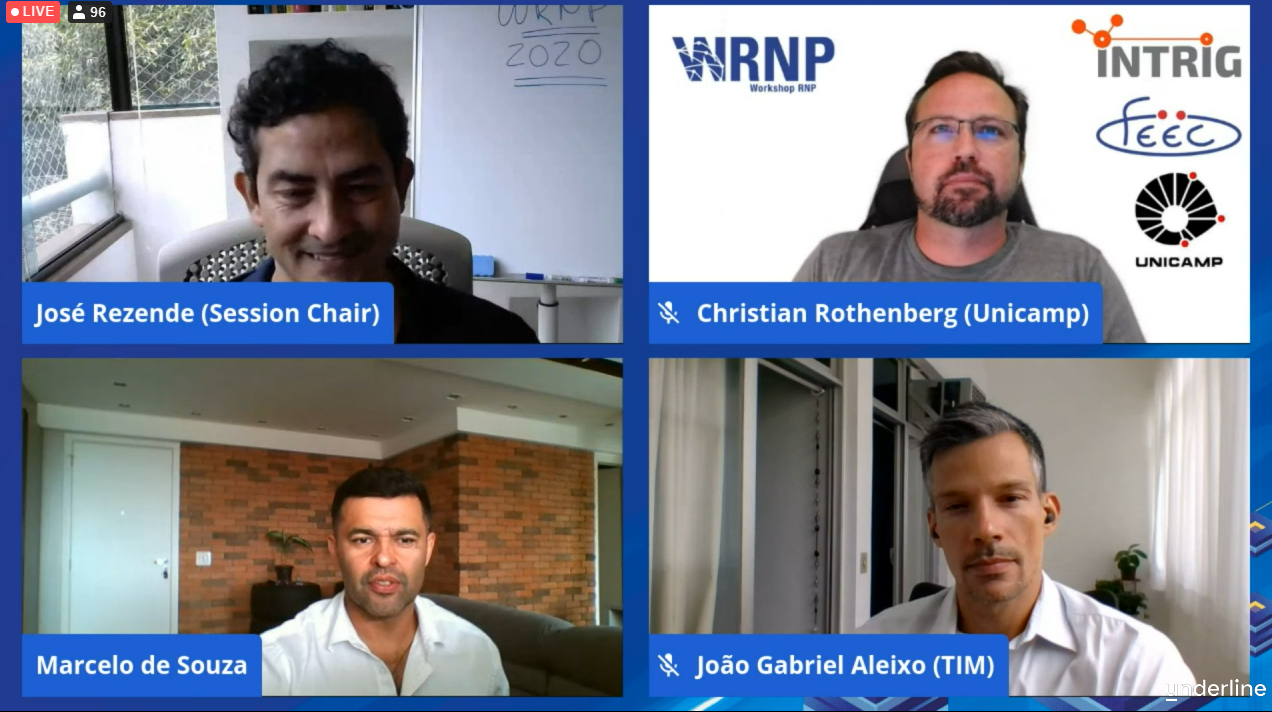 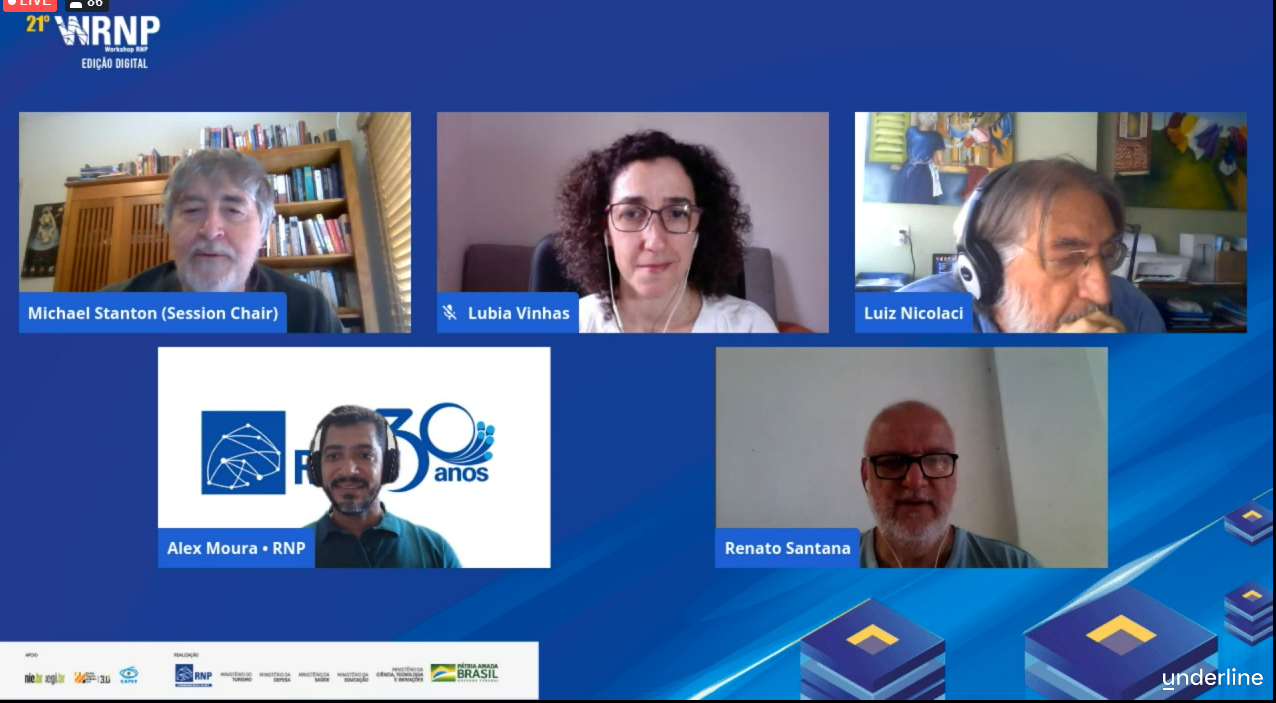 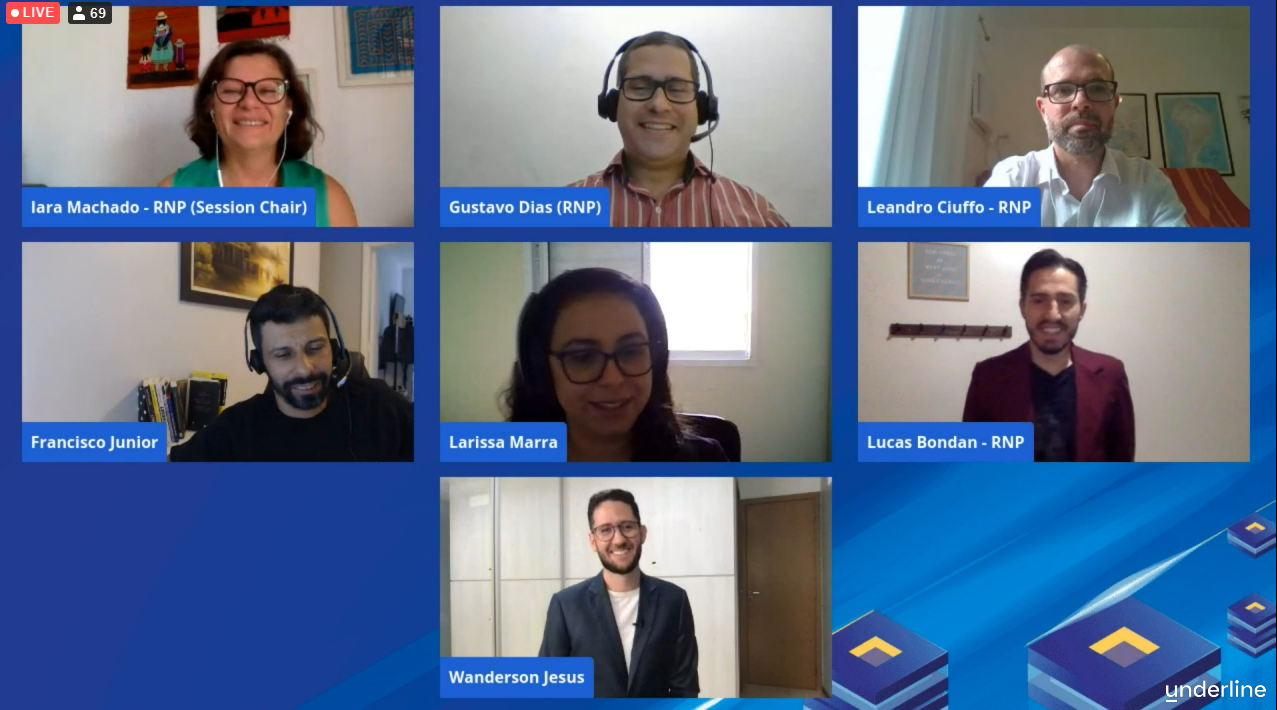 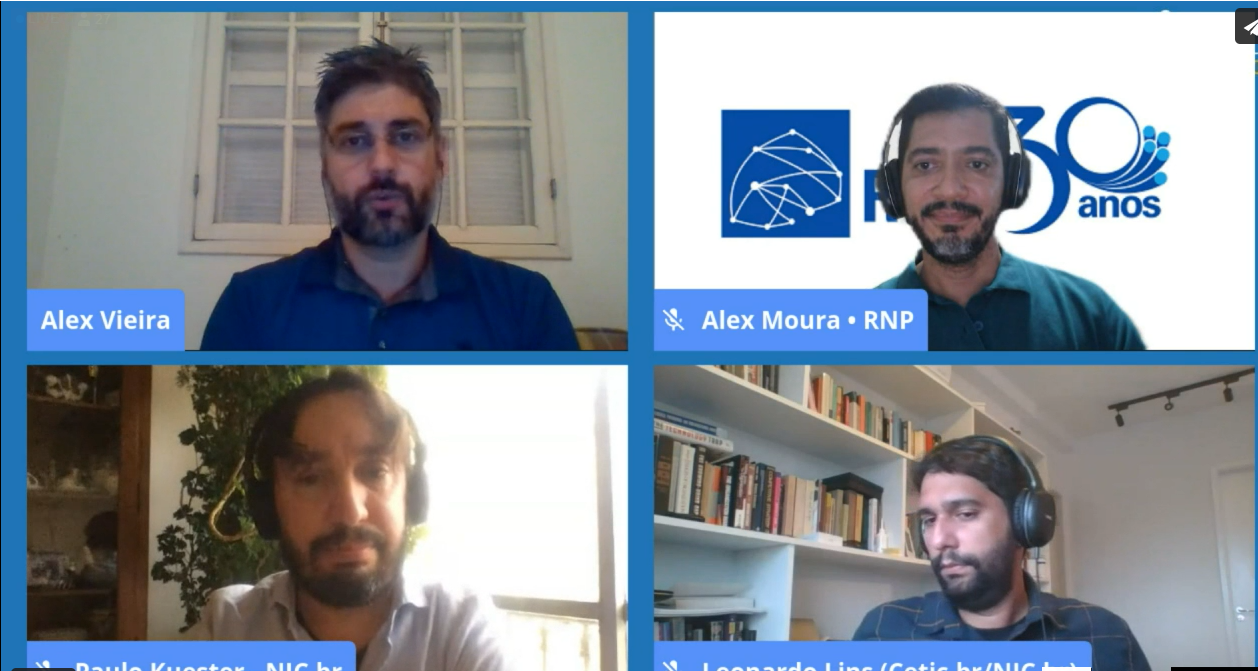 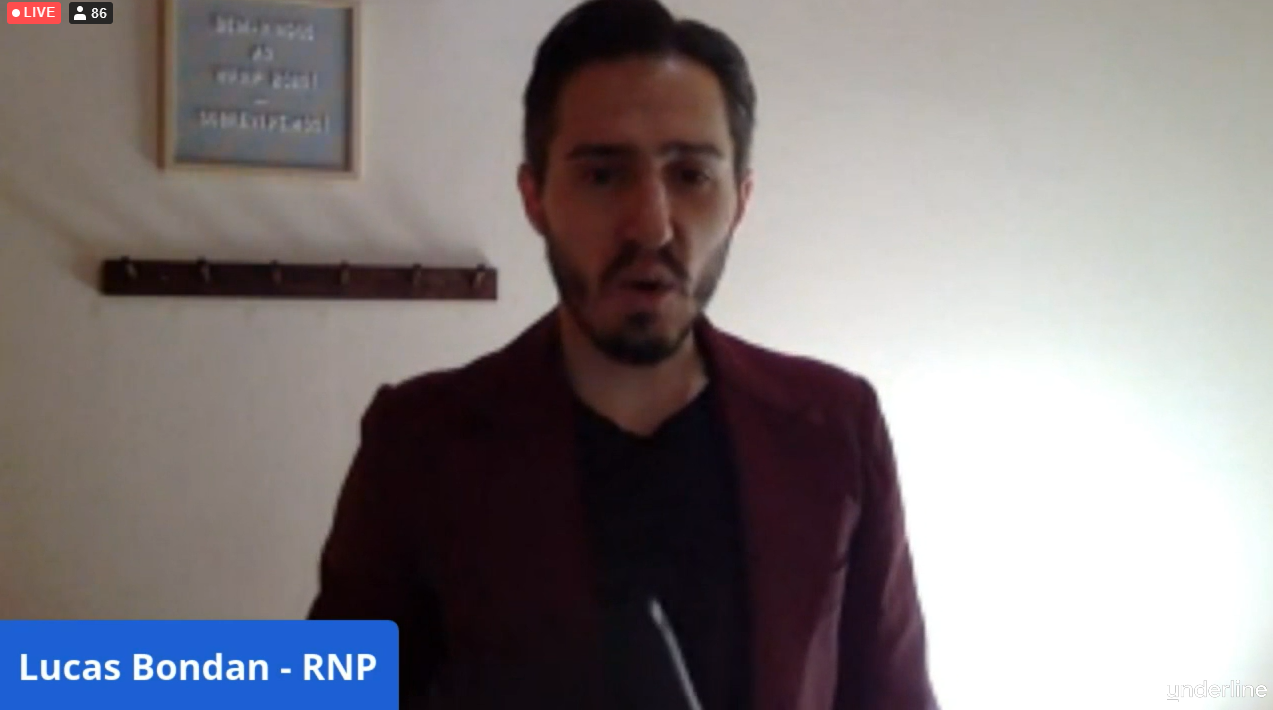 Check out the highlights of the second and last day of the 21st edition of WRNP, which was 100% digital for the first time in 21 years.

What would you like to know about the Seventh Generation of the Ipê Network?

Today, the Brazilian academic network is multi-gigabit, 100% optical fiber, and it already operates with 100 Gb/s circuits, starting from the Northeast, on the Fortaleza-Salvador route, through the partnership with Companhia Hidrelétrica do São Francisco (Chesf).  More recently, in October 2020, we illuminated the circuits Belém-Macapá and Macapá-Manaus at 100 Gb/s together with Telebras.

In 2021, more 100 Gb/s activations are planned in other regions of the country, based on the sharing of infrastructure with both electric power companies and providers. The subject was discussed in the panel “RNP network at 100G”, which opened the second day of WRNP, moderated by RNP's Engineering and Operations Deputy Director, Ari Frazão Júnior, and participation of the Engineering and Operations Director, Eduardo Grizendi, the representative of Chesf Rodrigo Leal de Siqueira, and RNP's backbone coordinator, Aluízio Hazin.

"To get to the user institution at 100 Gb/s, mainly outside the capitals, is still a challenge for the next few years, but we are already working on that,” Grizendi said.

Imagine following up the state of the art in high speed data transmission? At WRNP, it was possible! In the “LIVE Demo: Data transmission at 100Gbps”, Ibirisol Fontes Ferreira, network analyst at RNP Point of Presence in Bahia (PoP-BA/RNP), carried out live tests of point-to-point transfers with high latency and in long-distance scenarios. Starting between Salvador (BA) and Recife (PE), and then, with more kilometers distance, the test was extended beyond the Brazilian territorial limits: between Salvador and Miami (USA), reaching speeds of up to 100 Gb/s.

“The platform connects all these points and we are able to make these test shots that serve to validate the backbone capacity, and assess the quality of the links and the traffic engineering of the network”, Ibirisol explained.

In the presentation, the network analyst recovered the history of the initiative, which appeared in the second half of 2019 to demonstrate the effective capacity of the backbone in the active links in the Northeast region, which at the time, formed the largest set of active PoPs at 100Gb/s. At that time, there was the implantation of 100G in the Brazilian region. “We added all RNP PoPs in this work group: Bahia, Ceará, Paraíba, Pernambuco and Rio Grande do Norte. In a team with several international partners and the RNP System, we thought what this 100Gb/s demonstration platform would be in models based on existing band test platforms. We started with solutions already instantiated in the market, such as Speedtest”, he recalled.

This point-to-point transmission makes it possible to “transmit a satellite image with international collaboration, move libraries using the capacity of this link, make great data movement among other partnerships and assure the quality of the infrastructure”, as Ibirisol detailed. You can view these tests on page demo100g.rnp.br Access!

Teleportation, qbit, quantum entanglement. It may look like a science fiction movie, but it is Quantum Internet. This was the subject chosen by the keynote speaker at WRNP Antonio Abelém, who does not need introduction. Full professor at UFPA and with extensive curriculum in the network area, Abelém brought  to the audience at WRNP the results of his research in the area at the University of Massachusetts (UMass).

Do you know what qbit is? Professor Abelém explains: “on classical computing, we have the bit, 0 or 1. In the context of quantum computing, there is an analogous element called quantum bit, or qbit. It is not clearly identified as 0 or 1, but a combination of both, a state of overlap”.

Softwarization of Open and Disaggregated Networks: A road with no return? Yes!

Do you know what network disaggregation is? “It is the decomposition of the hardware and software components of the network in several blocks, which can now be purchased from different manufacturers. Now you have access to APIs of each of them, you can combine different manufacturers to provide the best balance between cost and capacity. You will mount your equipment in the best way to meet your requirement”, the professor at UFRJ and technical-scientific advisor of the Research, Development and Innovation Division at RNP, José Rezende, explained, he was moderator of the panel which concluded that softwarization of open and disaggregated networks is actually a road with no return.

Professor Christian Rothenberg from Unicamp presented the advantages of this movement from the economic point of view.

“From the academic point of view, it becomes easier to develop a solution, it might be tested on a university campus scale, or on larger ones, such as testbed FABRIC and FIBRE. We already have all signs of barriers being broken. Small players are growing with great potential to be part of this game. The only thing that remains is uncertainty. Five years from now we will not have answers for the following five years. It will be very dynamic”, the professor estimated.

The specialists from Technology Center & Labs of TIM Brasil João Gabriel Aleixo raised the discussion of the impact of these open and disaggregated technologies for the telecommunications sector and presented what has been developed at TIM Lab.

“Tim Brasil remains strong in its collaborative approach, it is in our bias. For me, it is a road with no return. It is a movement which tends to have a maturing journey, but which will bring benefits to all involved,” Aleixo said.

Closing the discussion and also following the opinion of the panel members, the leader of the technical team of Furukawa Electric, Marcelo Luiz de Souza, spoke about the disaggregation in optical access networks and their advantages.

“I think it is a technological change, a paradigm break which cannot be avoided. The gains are there and everyone wants to reduce operating costs. The big players do not resistant to technology anymore. It is a matter of time”, Marcelo concluded.

e-Science: challenges to use 100G

As it works with large-scale data, e-Science demands high-capacity networks to share these massive bases, enabling for them to be processed and result in knowledge. Within this context, the network scientist of RNP Michael Stanton moderated the panel which discussed the main challenges for the use of 100 Gb/s and which included the participation of Luiz Nicolaci da Costa, general director of LIneA, Lubia Vinhas, from the Earth Observation Coordination at INPE, and Renato Santana, Science and Technology assistant at CBPF.

The specialist of RNP Alex Moura opened the works showing how the organization offers support for e-Science by means of its infrastructure.

“We have a great backbone in order to support collaborative scientific research and we have made high investments in capillarity. We participate in access through submarine cables with connection to Europe, Africa and North America to offer the best possible infrastructure for our community", Alex said.

Next in the discussion, all representatives presented the activities carried out by their institutions and explained how expressive their demands for a network capable to sustain the huge  databases are. For this reason, the use of links at 100 Gb/s is becoming more and more urgent.

The debate generated consensus on the need of convergence among the members of the e-Science ecosystem in the country to seek more federal government investments able to promote the upgrade of the networks used by the researchers.

“There is lack of coordination. If we join our needs and present them to MCTI together, we will be able to show the high impact of these investments for the future of Brazil, with a long-term project”, Nicolaci, general director of LIneA, explained.

The impact of the pandemic on the Brazilian internet

To close the event, the joint panel with SBRC “The impact of the pandemic on the Brazilian internet” received three speakers, moderated by Alex Borges, professor and Researcher at UFJF. At the occasion, the guests contributed with different perspectives about the changes observed in the cyberspace. Alex Moura, e-Science specialist at RNP, spoke about the increased demand for services at RNP and the challenges overcome by the institution to enable quality deliveries for the society. “At RNP, the people proved to be very flexible for the adaptation to remote work. This capacity for change was determining to overcome the challenges, especially considering the increased demand for services”, he argued.

Leonardo Lins, coordinator of the research ICT Companies and ICT Providers of Cetic.br, used his presentation to explore data that prove changes in the behavior of the Brazilian Internet users, with highlight on the increased consumption in e-commerce, strengthening of the tele-work and establishment of remote education. Finally, Paulo Kuester Neto, Project Analyst at Ceptro.br, dedicated the final minutes of the panel to examine the quality of the Brazilian internet, assessed by different metrics. In the presented graphs, it was found out that, at the beginning of the pandemic, there was, for example, decrease in the quality of the streaming. However, he pondered: “The Brazilian internet was able to continue without major problems, despite the fact that the pandemic was something we had never seen before”.