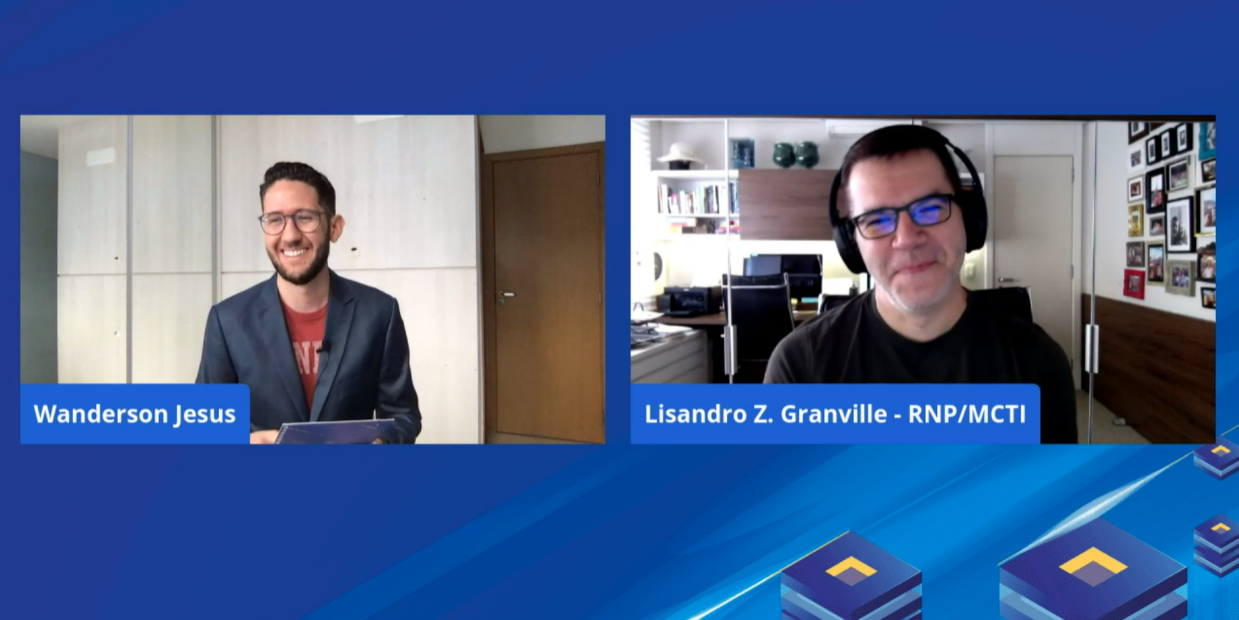 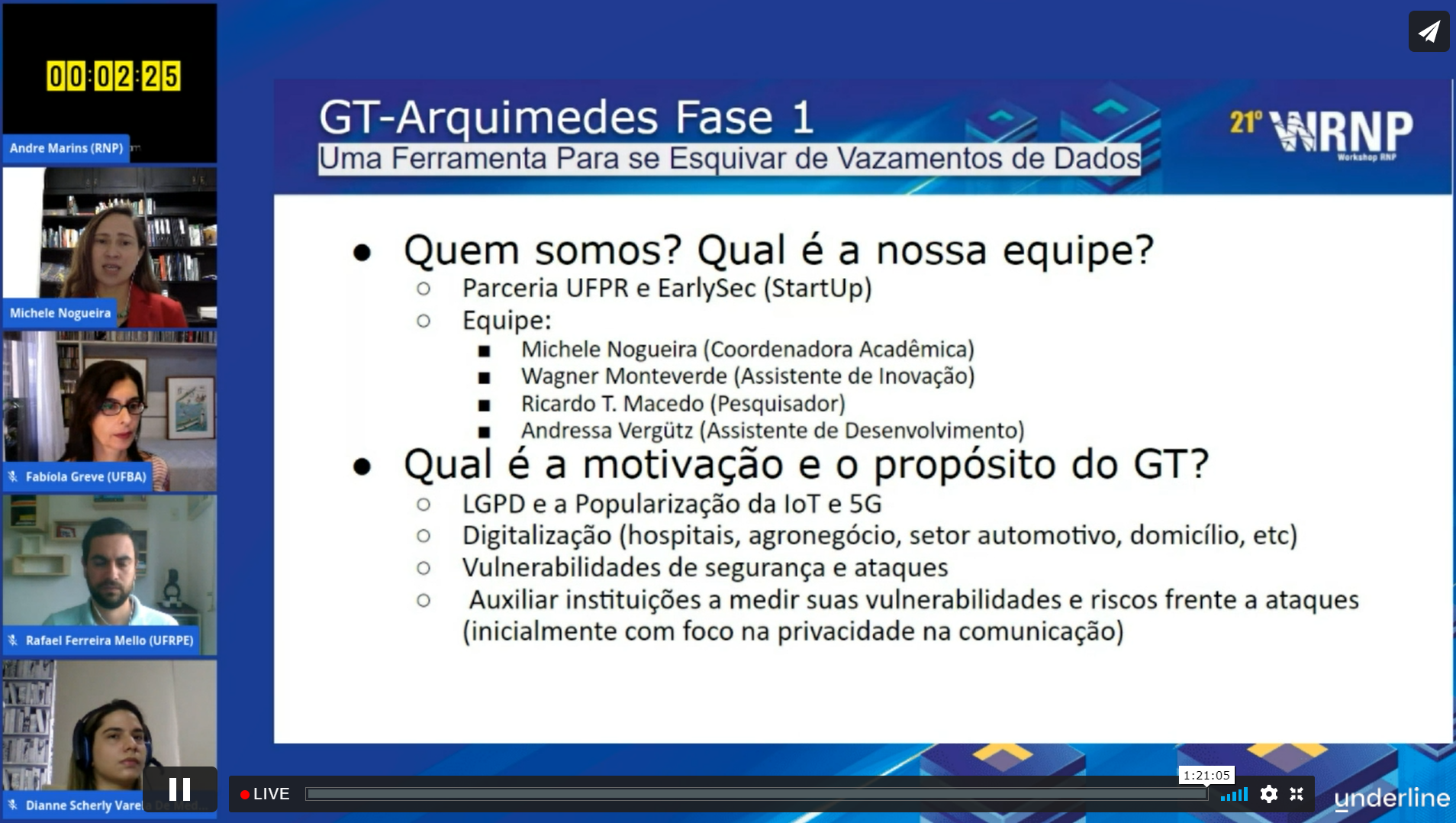 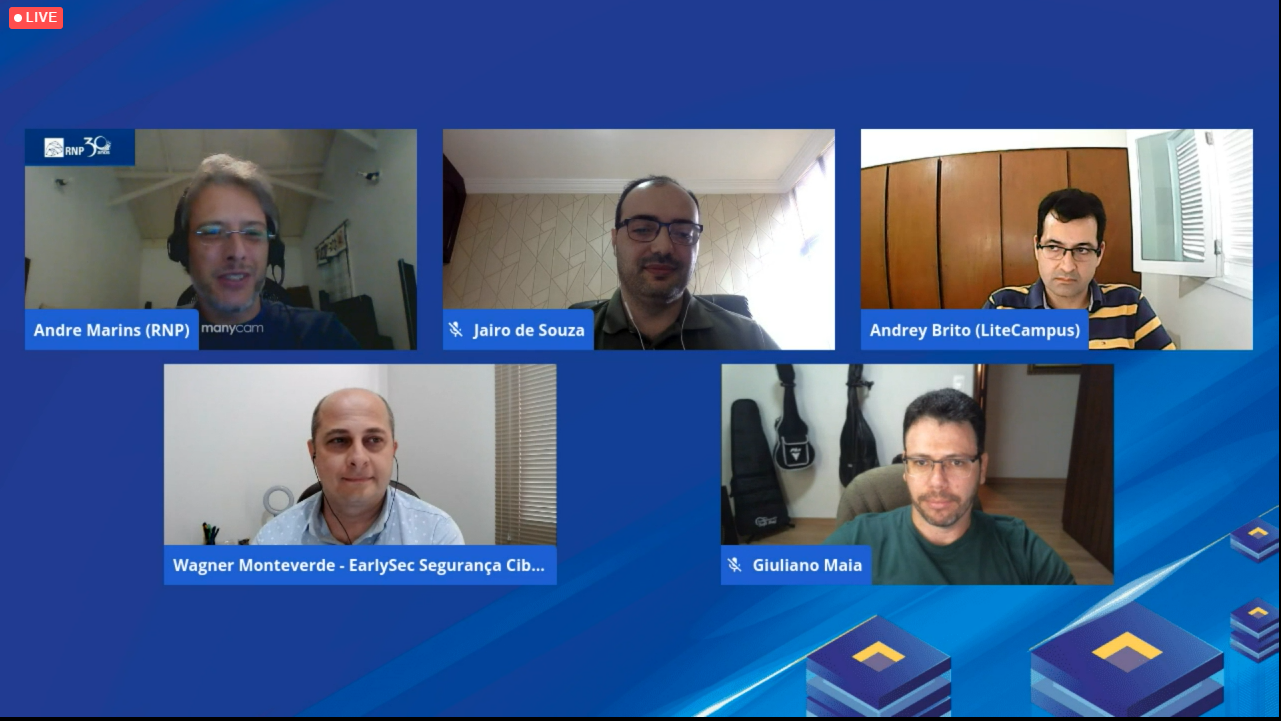 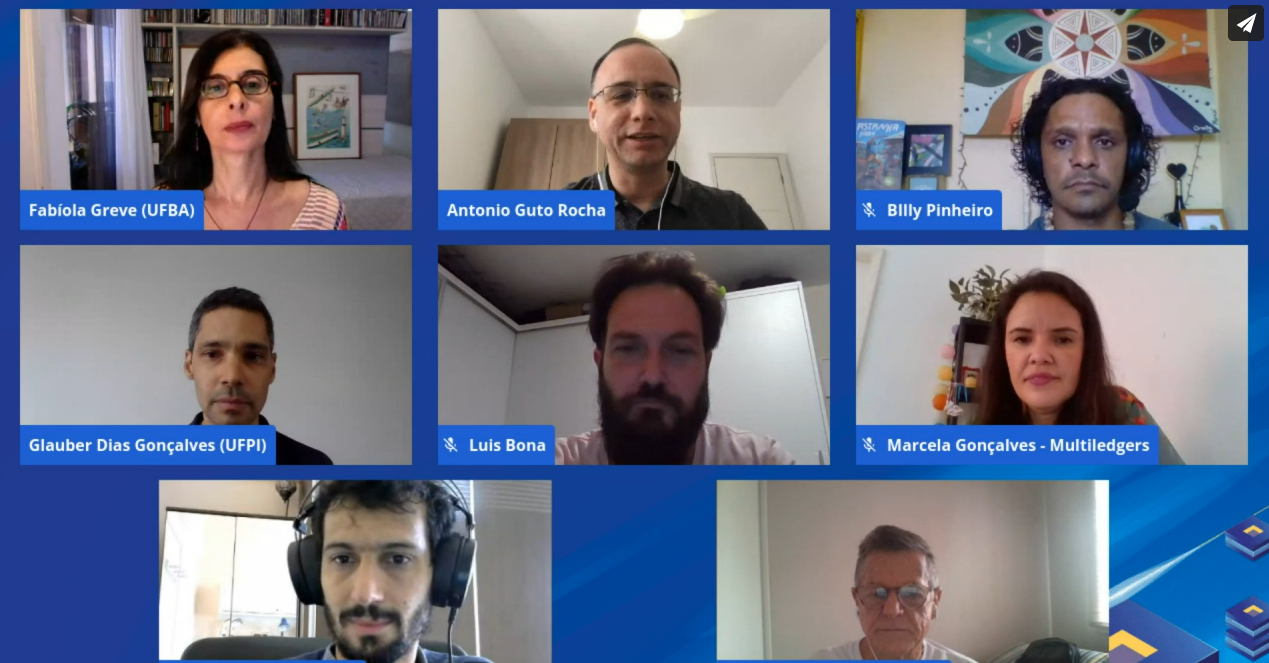 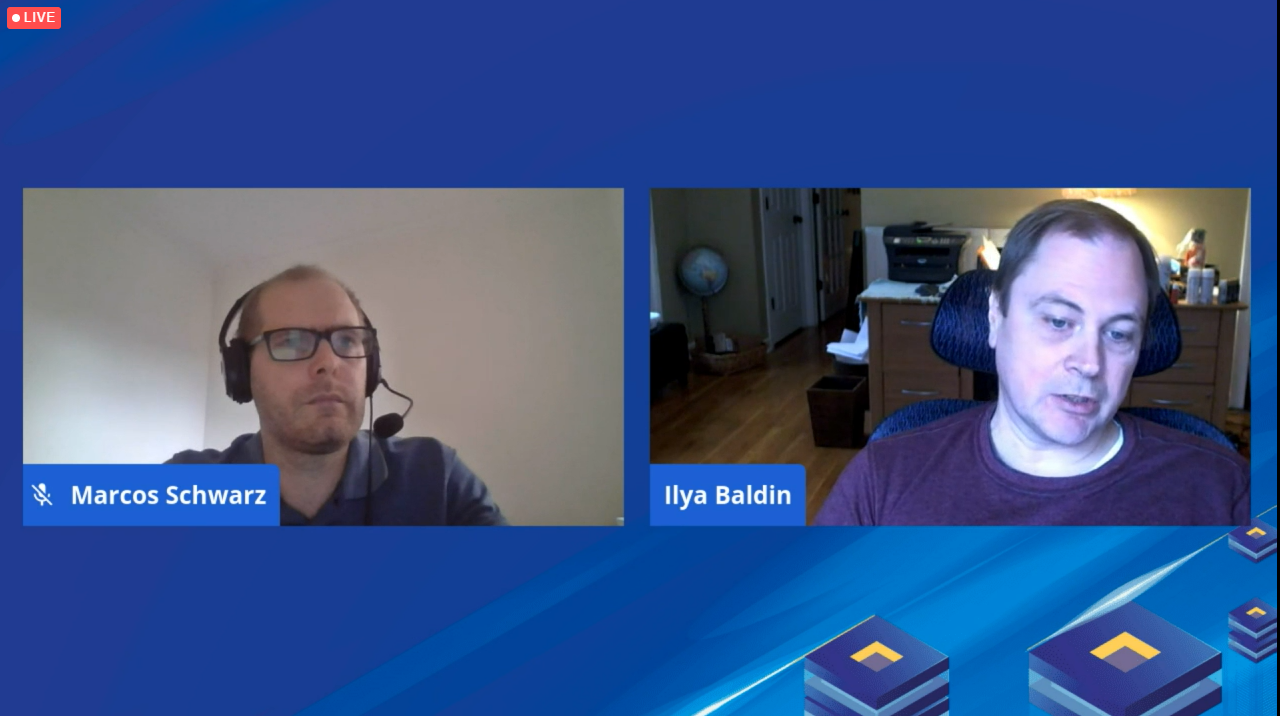 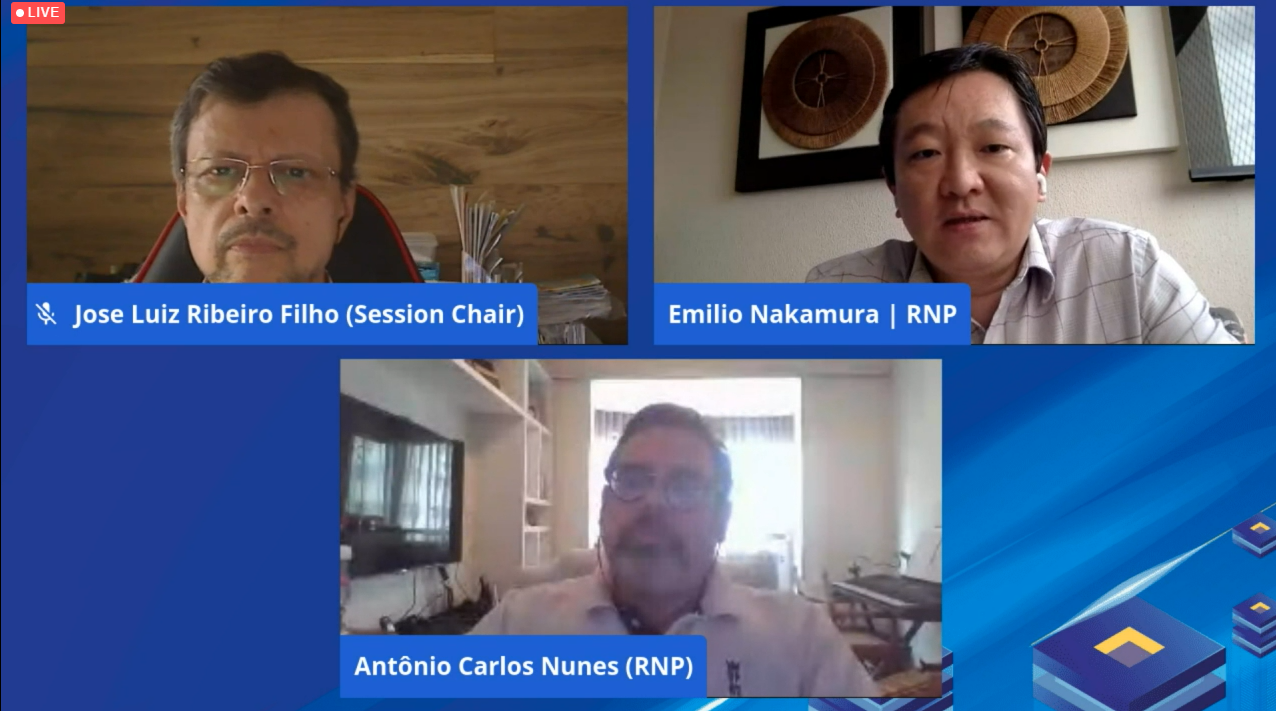 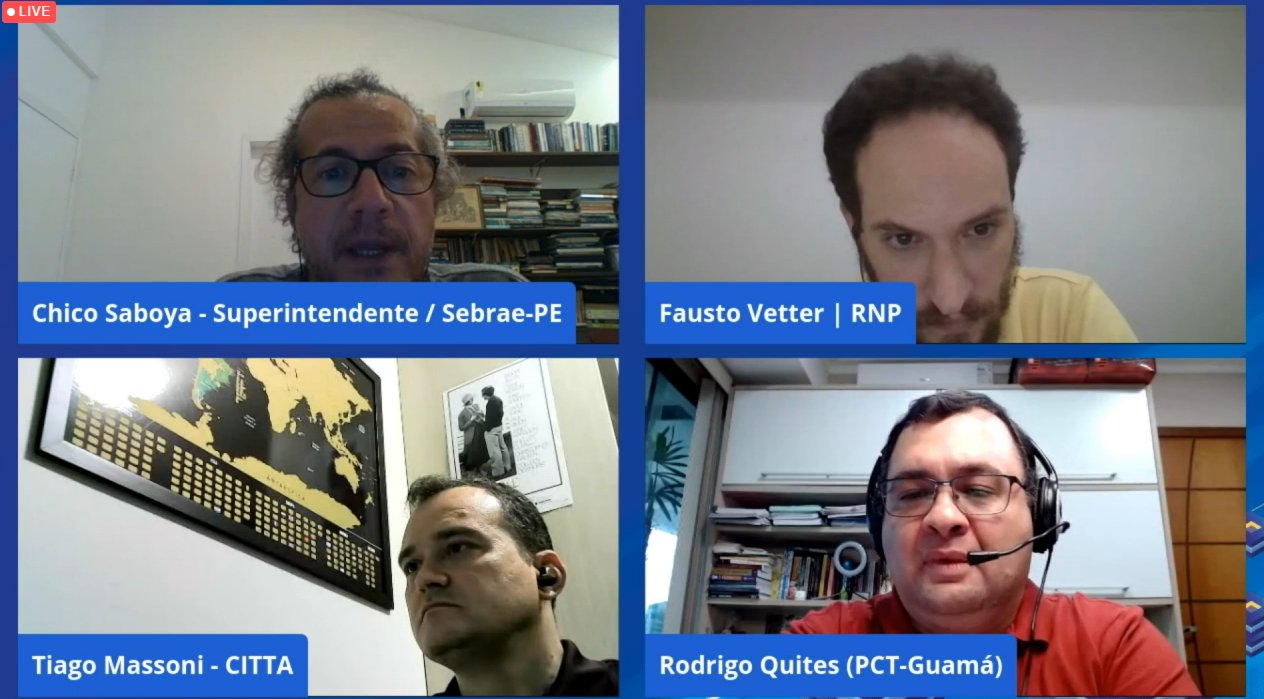 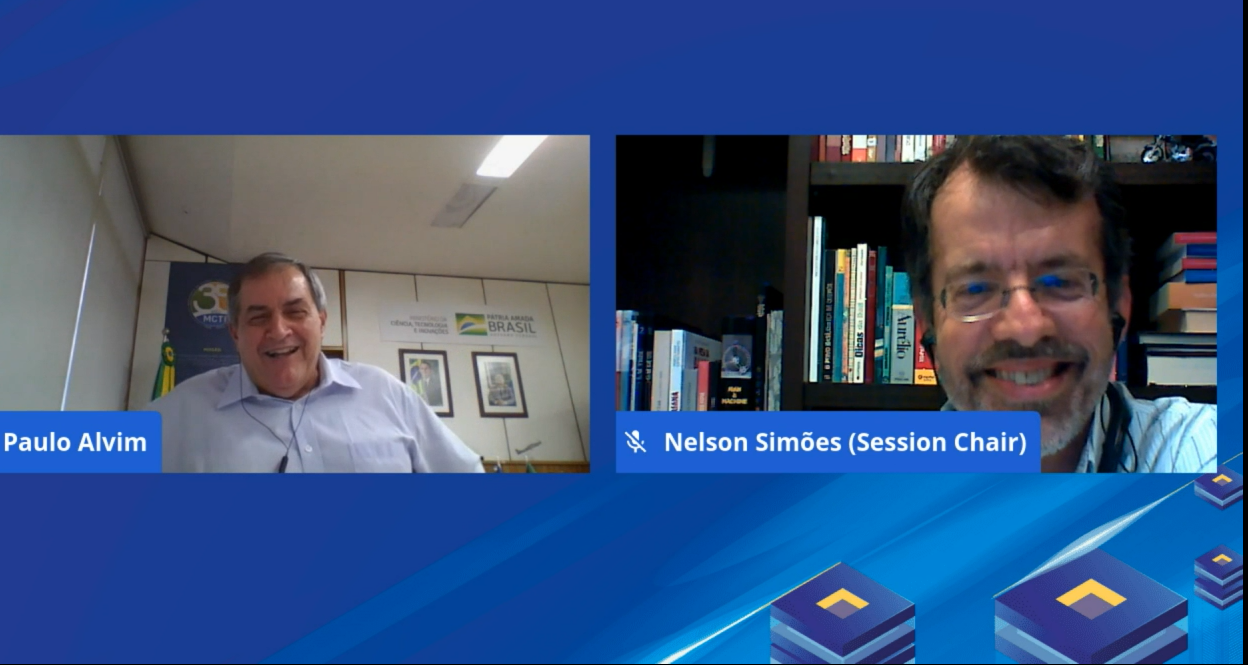 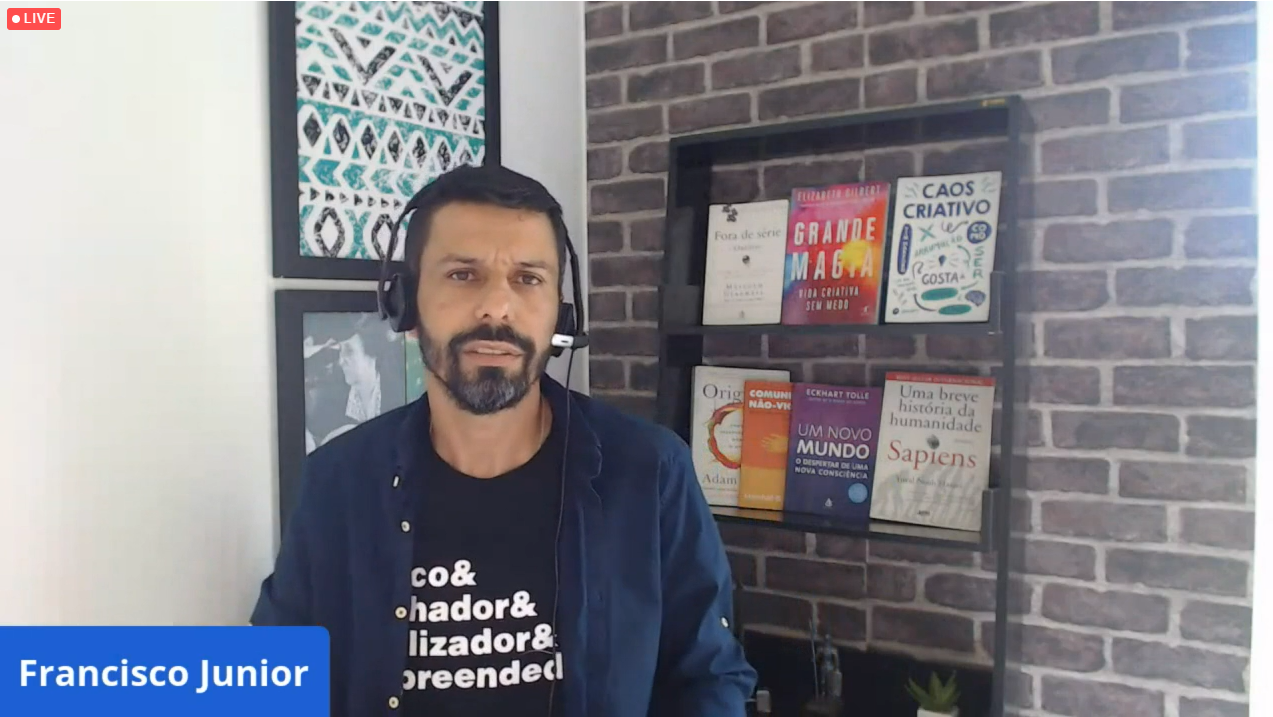 At the opening of the 21st edition of RNP Workshop (WRNP 2020), the Research, Development & Innovation director of RNP, Iara Machado, explained the whole context that involved the decision to postpone the event, following the decision of SBC in relation to SBRC, and hold it online due to the pandemic, to the participants. She highlighted the importance to hold the virtual meeting despite all the difficulties.

“We are trying to bring new experience. The spirit of WRNP is this: share our activities, the plans for the future and listen to you, participants. Say whatever you think. Everything will be welcomed, because we want to build a future together with you”, the director said.

In the first panel of the day, the deputy director of Research, Development & Innovation Management, Lisandro Granville and the manager of R&D Management, André Marins, presented the restructuring of the area within RNP with the absorption of the Center of Digital Technologies for Information and Communication (CTIC) and talked about the paradigm changes in the R&D call since last year.

“The transformation aimed precisely to seek to bring startups closer to the Working Groups (GTs). Either bring existing ones closer or create new startups. Thus, the new call seeks a faster value offer. GTs receive entrepreneurial training at the beginning of the project development and are committed to developing the first business model and the vision of the product or service in three months”, Marins explained.

Then, eight representatives of GTs selected in the 2019 and 2020 editions presented five-minute pitches with the goals and the status of the projects.

Check out who they are:

Panel debates the perspectives of Blockchain in Brazil in different areas

The perspectives about the Blockchain technology in Brazil in different areas - education, governance, infrastructure, identity and applications - were the subject of a panel in the morning, on the first day of WRNP 2020, moderated by professor and researcher at UFBA, Fabiola Greve, who also coordinates the Blockchain Technical Committee of RNP.

The researcher defended the possibilities of technology as a digital identity solution. “Blockchain is a network that contributes to the progress of the society, because it is very human-centered. It is transparent, enables auditing, it is inclusive and democratic, offers data privacy. It is what we call decentralization of the economy, because it brings a new paradigm in the trust relationships”, Fabiola Greve said.

Are you interested to learn more? Go to the CT-Blockchain page on Wiki.

Sharing platforms and infrastructures to support research and education networks

"Do you know what a testbed is? In Portuguese, the term could be translated as a test platform, a concept test or a product, as a prototype. These controlled experiments in real spaces are made to prove technical feasibility, and Ilya Baldin spoke about a testbed with more than 20 participating organizations and budget of 20 million dollars, when the microphones were made available on the first day of WRNP 2020. The first keynote speaker to present at the event shared about the FABRIC project: Adaptable and Programmable Research Infrastructure in Computer Sciences and Scientific Applications.

The Research and Infrastructure Network Director at Renaissance Computing Institute and member of the FABRIC foundation team began by summarizing the history of the so-called academic testbeds in the United States: since its creation in 2010, with basic network computing capabilities, programmability and limited scope; to the 4th generation testbeds, in force today, with heterogeneous resources, advanced uses of machine learning and artificial intelligence, large dedicated bands, a wide range of programmability and configurability. Baldin explains how successful testbeds are built and how they sustain themselves: “They are built from the favorable combination of the community needs, with a gap in the capabilities of the existing testbeds!”.

FABRIC is one of these cases. Born in the fourth and last generation with Data as a Service (DaaS), the project is “a programmable network testbed nationwide, with significant computational storage capacity at every node. In fact, where we would usually find a router, in FABRIC, you find a cluster with a switch and enabled router, as well as servers which can intervene in the path of the pack flows able to process this data in real time, in high quantity”, Baldin details. According to him, in the proposal, "each experiment is somehow independent, but it brings opportunities adding resources, instruments, and computing capacities from outside to be included in the experiments".

Baldin defends that FABRIC is undergoing even bigger transformation in the computing storage economy. “If we have to manufacture a router today, starting from scratch, considering the computing and storage cost we have today, it will probably not look like the routers we manufacture nowadays. There are many legacy assumptions. There was explosion of increased computing capacity, GPU's, FPGA's, among other types of auxiliary computing capacities. In short, it all comes to an opportunity to try to rethink the network architecture in a more dynamic way, simply because now, it is technologically possible to maintain and process more than what was impossible before”, he argues.

Challenges in the offer of services and cybersecurity during the pandemic

Year 2020 brought new requirements to assure the service security and availability remotely, in a fully distributed network environment. On the afternoon of the first day of WRNP, the event brought a panel with managers from the Services and Cybersecurity area of RNP to talk about these challenges. The meeting was moderated by the Administration and Finance Director, José Luiz Ribeiro Filho, and was attended by Antonio Carlos F. Nunes, Services and Solutions Director, and Emilio Nakamura, Cybersecurity Deputy Director.

“The pandemic came to show the role the academic networks play for their user institutions,” Antonio Carlos F. Nunes said, exemplifying the increase in the use of the Web Conference service for remote education. Today, the service reaches the milestone of 26 thousand simultaneous users daily, and may reach the scale of 100 thousand in the coming months. He also highlighted the Connected Students project carried out by RNP in partnership with MEC, which has already delivered more than 68 thousand mobile internet chips to 70 higher education institutions in the country.

In the cybersecurity area, 2020 was the year LGPD entered into force, which required adaptation actions, such as transparency in the personal data handling and protection against leaks. The Cybersecurity Deputy Director highlighted that the organizational environment started to be fully distributed. “In the beginning, the strategy was to reduce the security requirements, to release access, and then gradually resume it. Another point is the perimeter issue. The organization's network has become the network of all its collaborators at their homes,” Cybersecurity Deputy Director, Emilio Nakamura, said.

What does the innovation ecosystem have to know about the RNP System?

RNP and Anprotec are working together to structure a national innovation network by offering cyber infrastructure and services as a platform for technology centers and other players. This partnership was the subject of a debate moderated by the president of Anprotec, Chico Saboya.

“What the pandemic brought was a sense of emergency for what we were already facing. He drew attention to how late or slow we are to promote digital transformation, for example, provide cloud services or use tools for remote work. For this reason, the partnership between RNP and Anprotec becomes even more relevant”, Chico highlighted.

According to Rodrigo Quites Reis, the pilot brought, among other benefits, prioritization of the demands of PCT-GUAMÁ. “We are no longer a user stuck to UFPA, which is one of the largest universities in terms of number of students in the country. Of course, the university has other priorities. When we entered the project, we started to be treated as priority by RNP, and our demands were met quickly. And, finally, we got a main seat to discuss the improvement of the networks around”, Reis said.

Regarding CITTA, Thiago Massoni noted that the pandemic ended up being a driver for competitor companies to increase their services quickly, which reduced the use of those provided by RNP.

“Web Conference was used a lot at the beginning of the pandemic, but the other competitor tools have evolved a lot and managed to catch up and take the place. They have evolved a lot in terms of scalability and functionality. Now everyone has features available only on Web Conference before. It became more difficult to convince the people to use it”, Massoni mentioned.

The last presentation on the first day of the event featured the general director of RNP Nelson Simões, and the Entrepreneurship and Innovation Secretary of the Ministry of Science, Technology and Innovation (MTCI) Paulo Alvim, to talk about the topic of Alvim's ministry.

“Much of what we talk about entrepreneurship had to be put into practice and very quickly in 2020. Many of our plans had to be reviewed and updated. Not only were we challenged, but we were also called to support institutions, students and teachers”, Nelson said. The top leader of RNP presented the RNP system after Covid-19, exploring possible horizons, opportunities for digital transformation and listed three main drivers of Technology in Education:

Paulo Alvim collaborated with the debate, bringing the vision of MCTI on the subject. "Now in the pandemic, it became clear that all effort and investment in science and technology is transformed into impact and improvement in our population´s lives," he added. Paulo mentioned some of the Ministry's main achievements and highlighted the National IoT (Internet of Things) Plan, the milestones in technology 4.0 as investment in agro industry and smart and sustainable cities, the spread of Tourism 4.0 and the telemedicine solution as a response to the pandemic. "The world of technologies 4.0 is fundamental for the digital transformation process," he says. The secretary points out innovation as a competitive advantage, increasingly more common within the companies and part of the roots of companies, such as startups ".