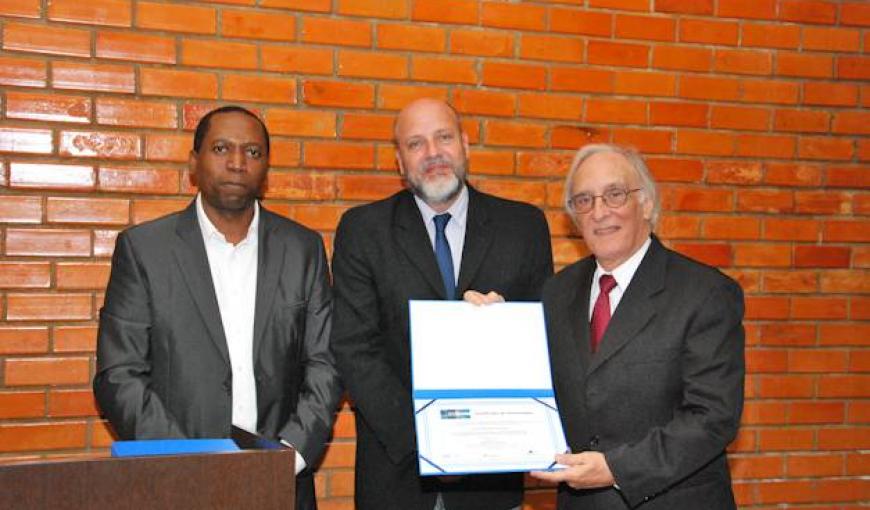 In 1997, the Universidade de Brasília (UnB) created the first graduation of the country in Communication Network Engineering, with the aim of training professionals who act in a multidisciplinary way in the Information and Communication Technologies (ICT) market. Twenty years later, UnB celebrated the pioneering ceremony of the course in ceremony held at the Faculty of Technology (FT) on June 29, which also celebrated the 55 years of UnB and five decades of FT.

The event was attended by the general director of RNP, Nelson Simões, who showed the current scenario of education and research networks in the country and the importance of graduation in Network Engineering in this context. In his presentation, he cited four professional challenges from RNP’s perspective: infrastructure modernization, advanced application development, collaboration and community relations, and the change needed for innovation.

Nelson Simões highlighted RNP’s efforts to expand connectivity in national territory and facilitate collaboration between teaching and research institutions by mentioning the organization’s involvement in community network projects such as the Telemedicine University Network (Rute) and the Networked Cinemas project. “We have a good communication network, good scientific computing centers and state-of-the-art laboratories, but we do not have a coordinated vision of what cyberinfrastructure is for the country in the long term and how it should evolve”, said Nelson Simões during the event at UnB.

According to the director of FT/UnB, Antônio Brasil, the Department of Electrical Engineering of UnB occupied a differentiated position in the 90’s, for the creation of two courses in the Faculty of Technology that represented innovations at the time: of Telecommunications Engineering and Mechatronics Engineering.

Soon after, came the appearance of the first graduation course in Communications Engineering of the country, which celebrates 20 years. “The implementation of the course had a great involvement of teachers of the area and a strong relationship with the ICT market, both in hardware and software, for the formation of a focused professional”, says UnB professor Antônio Brasil.

According to the academic, the area continues to cause constant changes today. “The Network Engineering student who enters the university does not know what technologies will be present in his profession when he graduates. It is the type of action that requires a professional dynamic and tuned to the modifications, in the sense of accompanying this technological evolution”, evaluated Antonio Brasil.

The director of FT/UnB highlighted the partnership with RNP for greater collaboration between the Brazilian and international scientific community. “RNP is essential for Brazil and an important benchmark for our graduation. The technological and strategic challenges it faces are a model for any network engineering course”, he said.

Legend: Georges Nze, Antônio Brasil and former president José Geraldo de Sousa Júnior, one of the honorees in the commemoration for the 20 years of Network Engineering at UnB.