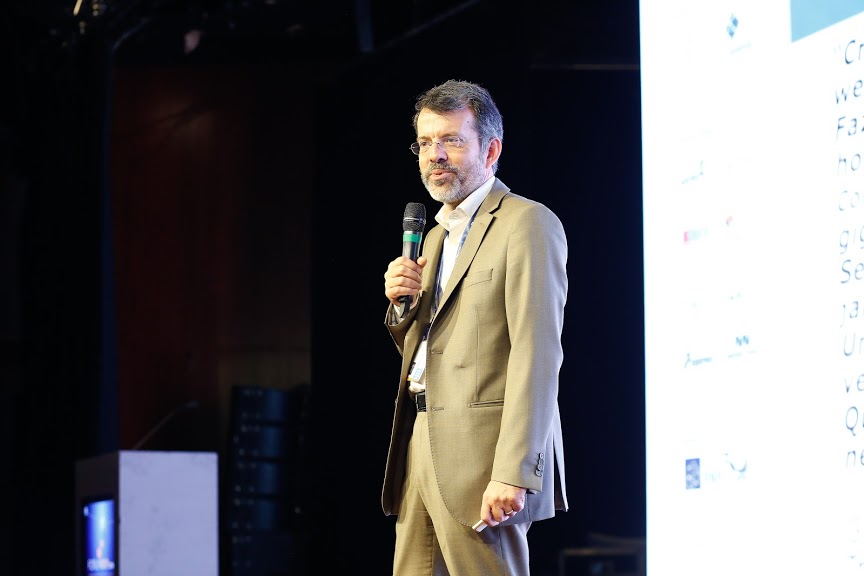 During the official opening of 2019 RNP Forum, the director general, Nelson Simões, lectured and talked a little about the RNP path of 30 years, since the first backbone implementation in 1992 until the seventh generation of the Ipê Network at 100 Gb/s.

The director also exposed the RNP strategy aiming to face the next challenges within the transformation level to which the world is going through.

“Digital transformation is a much more cultural change. We have to stop doing things somehow and change. If we bet on our talents, we believe we will be able to make this change. It is also noteworthy to recognize that there is guiding principle in everything we do: the public spirit we have, the neutrality and the courage of undertake, even when we do not know if it is possible to reach some results,” highlighted Nelson.

Discussion on de-bureaucratization of Brazilian universities has raised a point of concordance and attention: the beginning of this transformation should be the change in the organizational culture of institutions and not only the transfer of processes to digital means.

“We have to risk more with innovative experiences. In the contrary to what people say, universities are more conservative and the great risk we run is to digitalize bureaucracy. We need to design quicker systemic projects and hear more the society as a whole, by making use of its critical potential to capture demands through agility and simplification,” emphasized the dean of Universidade Estadual da Paraíba (UEPB), Dr. Prof. Antonio Guedes Rangel Junior.

Concerns regarding changes that institutions will have to make in order to comply with the Personal Data Protection General Law (LGPD, acronym in Portuguese), which shall come into force in August of 2020, were also the subject in the second day of RNP Forum. Two different perspectives were introduced: one of legal security and another from cybernetic security.

“It is not a ‘little law’ that is considered the extra player of legal framework. I can assure you that all public institutions are putting all their efforts to implement it,” declared Andrea Willemin, PhD in Law of Information Society and Intellectual Property.

The head of RNP Engineering and Operations, Eduardo Grizendi, moderated a panel on Government Networks. After he introduced the RNP networks spread throughout the country and partners who helped developed them, Weldson Lima exposed the network and infrastructure operations, as well as the solutions developed by Serpro. Frank Pires made an overview of the current DATASUS communication network.

The Abrint lawyer, Daniele Frasson, finished the discussion with a contribution of regional providers for expanding the broadband in Brazil.

“During the period I have been working with providers, I have never seen a so engaged crop to make broadband arrive to all the places in the country,” said Daniele.

Blockchain for education and research

Blockchain applications for beyond the financial market were the theme of the panel that opened the Arena Fórum space activities, in the second day of the RNP Forum activities. Mediated by Fabíola Greve, a professor from Universidade Federal da Bahia (UFBA), the table included Rosini Kadami, co-founder of the Blockchain Academy, Alexandre Barbosa, researcher at Instituto de Tecnologia e Sociedade (ITS), and Marco Tulio Lima, product manager at Serviço Federal de Processamento de Dados (Serpro).

Rosini Kadami highlighted the expected potential of blockchain for the development of a trustful environment in Brazil. But the ITS researcher, Alexandre Barbosa, brought the audience cases of using this technology, such as the Facebook cryptocoin, which will be available in 2020. The Blockchain product manager of Serpro, Marco Tulio Lima, introduced Federal Government initiatives during the implementation of this technology.

Technology and Revolution in education

The impact of digital technologies in education has been discussed at Arena Fórum space, in the second day of activities in the RNP Forum. The debated counted with the participation of the LEO Learning CEO, Richard Vasconcelos, of the member of the Brazilian Academy of Education and head of Digital Pages, Ronaldo Mota, and professor of Fundação Getúlio Vargas (FGV), Ney Franco.

“Is a professor able to be replaced by a robot?,” provoked Richard Vasconcelos. “Professors need to change their role and act as facilitators,” he said. The Digital Pages scientific director, Ronaldo Mota, made a panorama on the three moments in education  revolution history: school creation, then the press and modern book inventions, and digital revolution, today.

But the professor of Fundação Getúlio Vargas, Ney Franco, questioned the video-class role on distance learning. “Video-class is another learning tool. You need to understand who you are talking to and how to communicate,” the academic declared.

Ronaldo Mota was also present in the auditorium as the moderator of the table that discussed the theme “Digital Transformation and  Education in Non-governmental Institutions” and counted with presentations by Claudia Andreatini, from Unip, Jose Alberto from the educational group SER, and Felipe Mattos, from Kroton Educacional.

The use of artificial intelligence in education has been discussed during the RNP Forum, in Arena Fórum space. The R&D coordinator of RNP, Rafael Valle, introduced six projects developed in the scope of RNP Microsoft Challenge in Artificial Intelligence.

Marcelo Vannini, from UNIP, showed the institution experience in applying the artificial intelligence in its distance teaching platform, which contributes to create student engagement. But Diogo Caetano, of Kasco P&D Tecnologia, on the other hand, showed innovative solutions in artificial intelligence from the company to the education field. They include UHD Player, a digital content exhibitor that used facial recognition technology.

Digital Transformation from the government point-of-view ended the Arena Fórum activities in the second day of RNP Forum. Marilia Câmara, We Gov executive, presented the institution, which supports and helps public institutions in innovation projects. “We need to bring citizens to the role of protagonism to improve services and increase efficiency of public administration,” Marília declared.

The head of Technology and Innovation from Santa Catarina Government, Felix da Silva, shared the state Executive power experience in eliminating the use of paper in three months. To do so, an agenda was created for the Governo sem Papel project. “Digital Transformation is understanding what we can do to improve people’s lives with technology,” declared the manager.

The panel also counted with the participation of Regiani Padeti, from the City of São Bernardo do Campo, who shared the city hall journey to digitalize their administrative processes.

During the end of the second day of the event, the communication coordinator, Leonie Gouveia, showed a video with statements from employees who actively participated in paving the road of 30 years of RNP. And Ari Frazão made a celebrative presentation for the date, showing the entire path, with challenges and victories, which was run in this long trajectory.

“The coolest is to see the RNP social role. We know that in the end of the road, we will make a difference. We are able to give better conditions for a student that is in a remote place, so that he/she may evolve and contribute to our country,” Ari celebrated.

Check out the photos from August 27