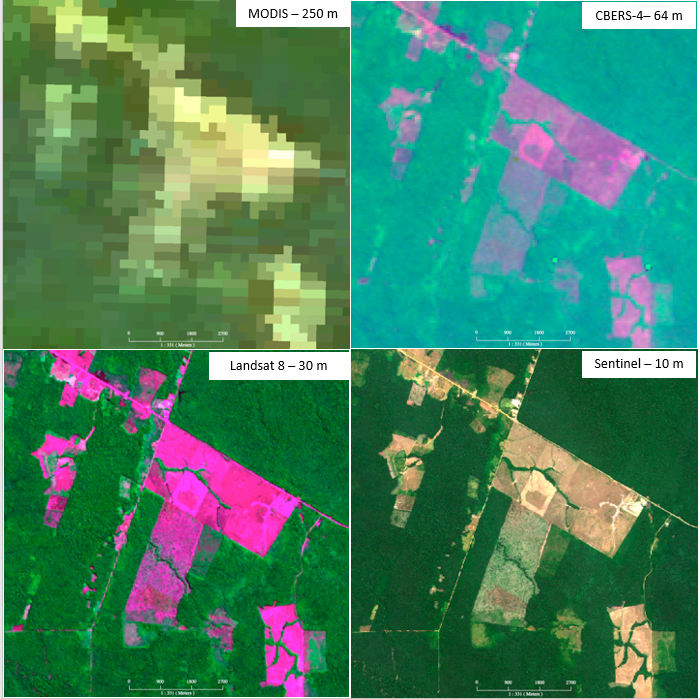 Monitoring of the decrease in air pollution during the coronavirus pandemic, of climate change and of forest fire alerts. These are some of the interesting activities and research for Brazil and for the world that make use of the data generated by the Copernicus project. This program of the European Commission counts on the international cooperation of various countries, including Brazil, Colombia and Chile in Latin America.

Copernicus was created with the objective of providing services based on satellite and in-situ (in other words, field collected) data that allow observation of the state of our planet. For this purpose, the program planned a set of satellite missions, called Sentinel, coordinated by the European Space Agency (ESA). Each Sentinel mission focuses on one aspect of Earth observation, the atmosphere, the oceans, or the land cover. Their images generate data for weather forecasting, observation of land use and coverage, and monitoring of coastal and ocean areas and of the atmosphere. For example, some data is related to air quality, to carbon emissions and to the state of the ozone layer.

The Ministry of Science, Technology, Innovations and Communications (MCTIC) and the European Commission signed in 2018 a Cooperation Arrangement in the context of the Copernicus Programme. Within this agreement, the Brazilian Space Agency (AEB), the National Institute for Space Research (INPE) and the ESA signed a Technical Cooperation Arrangement on access to Sentinel data, data calibration activities and development applications.

According to Lubia Vinhas, coordinator of Earth Observation at INPE, the innovations brought about by the Sentinel missions as a whole are in the terms of use, with a policy that allows access to the data for scientific collaboration.

“The innovation is the complementarity of each of the Sentinels missions and the expectative of their continuity. The policy of free access to Sentinel data makes it possible for new applications to be developed and for existing ones to be improved” affirms Lubia.

The Technical Cooperation Arrangement with ESA, valid until 2024, defines that INPE become a regional hub in Latin America for Copernicus data, with the right of access to data from the set of satellites, as well as from non-specific data processing and application development for Copernicus services.

An example of the importance of Copernicus on a global level was the release of the international system for monitoring of carbon dioxide and other gases that provoke the greenhouse effect.  This data supported the implementation of the Paris Agreement, that establishes actions for the reduction of emission of gases with greenhouse effect as of 2020.

The partnership with Brazil also allowed the use of satellite images to aid researchers to document recent environmental disasters, such as the collapse in January, 2019, of a holding dam in Brumadinho (MG), belonging to the mineral company Vale, and the advance of the deforestation in the Amazon region.

To monitor deforestation and forest degradation, INPE has developed a system of alert in cases of alteration of forest cover in the Amazon region. The data contribute to feeding TerraBrasilis, an INPE platform for organization, access and usage of geographic data and environmental monitoring.

Further contributions of Sentinel 1 have included the monitoring of oil spills off the Brazilian cost, in partnership with the Navy and with the Brazilian Institute of the Environment and Renewable Natural Resources (Ibama). According to INPE, one application of increasing importance in Brazil is the use of differential interferometry for detection of land deformation.

According to INPE researchers, the data generated by the Copernicus program are exceptionally large. The coverage of images from Sentinels 1, 2 and 3 for whole of Brazil, generates more than 170 Petabytes per year. “For this reason, a national hub demands a robust networking and storage infrastructure, as well as efficient access interfaces, to support the community of users, and its sustainability requires meeting the costs involved” commented Lubia.

With headquarters in São José dos Campos and its HPC centre in Cachoeira Paulista, both in the state of São Paulo (SP), INPE is a research institute of the Brazilian government, and currently has two 10 Gb/s connections to RNP’s national academical network. European and Latin American academic networks, including RNP, will begin to operate in 2021 the first direct data network connection between Europe and South America, benefiting the exchange of data and intensity of scientific collaboration between these regions.

Legends: examples of space resolutions in optical imagens of satellite Sentinel 3, of Copernicus project, for monitoring of a deforestation area.