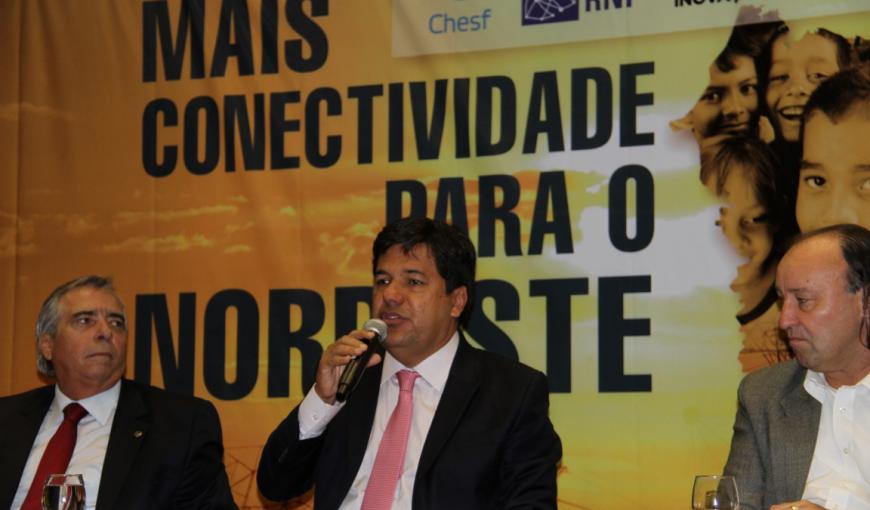 On September 19, the Brazilian National Research and Educational Network (RNP) executed a technical cooperation agreement with hydroelectric power company Chesf (Companhia Hidroelétrica do São Francisco, in Portuguese), aiming the optical infrastructure share throughout the Northeast region of Brazil, being supported by the company’s transmission lines. The partnership will enable the acceleration of high performance infrastructure offer for education and research, in addition to benefit the high-speed internet access of the academic community, including research centers, schools, higher educations, educational hospitals and technological education centers.

The event held in the head office of Chesf, in the city of Recife, was attended by the Ministry of Education, Mendonça Filho, the president of Chesf, José Carlos de Miranda Farias, the general director of RNP, Nelson Simões, the secretary of electric power of Ministry of Mines and Energy, Fábio Lopes Alves, and the deputy executive secretary of Science, Technology, Innovations and Communications, Alfonso Orlandi Neto.

According to RNP, the agreement with Chesf will directly benefit 39 federal institution campuses served by the academic network, in nine states of region covered by the optical fiber infrastructure of Chesf. “This is a method to reach students, professors and researchers working directly with collaboration applications at distance, such as, for instance, the supercomputer at the state of Rio de Janeiro. We will build a world-class infrastructure, which will be the main element of knowledge generation in the country and within such states”, said the general director of RNP, Nelson Simões.

On the other hand, Chesf will be benefited with the telecommunication infrastructure advance, ensuring greater reliability to serve the operation and maintenance of its electrical system, which is composed by a transmission lines grid that reaches 20 thousand km (12427 miles). The Chesf’s President – Miranda Farias – stated that this long distance optical fiber infrastructure can reach great capillarity. “More than offering electric power, we want to contribute to connect people to this socio-economic and social development”, he said.

The Ministry of Education, Mendonça Filho, stressed the regional development structure brought by the agreement and the importance of the academic network for the country. “This fiber optic infrastructure made feasible by Chesf is key for dissemination and propagation of knowledge in education and research institutions on the countryside, so that they can have the same leveling of capitals”, said the minister.

The students, professors, researchers and administrative servers used in the federal network of education and research of Northeast will be benefited with the agreement. These users will enjoy not only the Internet infrastructure of high capacity, as well as all the services offered by RNP to the academic community.

The agreement, with duration of 20 years, expects investments from the parties. RNP will direct funds over the next four years for the new generation development of Ipê network, a network infrastructure dedicated to Brazilian community of higher education and research, managed by the organization. Around R$42 million will be invested, expanding the infrastructure assigned without lines by Chesf, and avoiding annual costs of R$24 million.

In the long term, the agreement will also support the efforts of states in the Northeast networks internalization to connect universities and state institutions, established under the Programas Veredas Novas [New Paths Programs], an initiative of MCTIC and State Secretary Council for Science, Technology and Innovation Affairs (Consecti).

Photo 1: The Ministry of Education, Mendonça Filho, during the ceremony in the Chesf’s head office for the agreement execution.