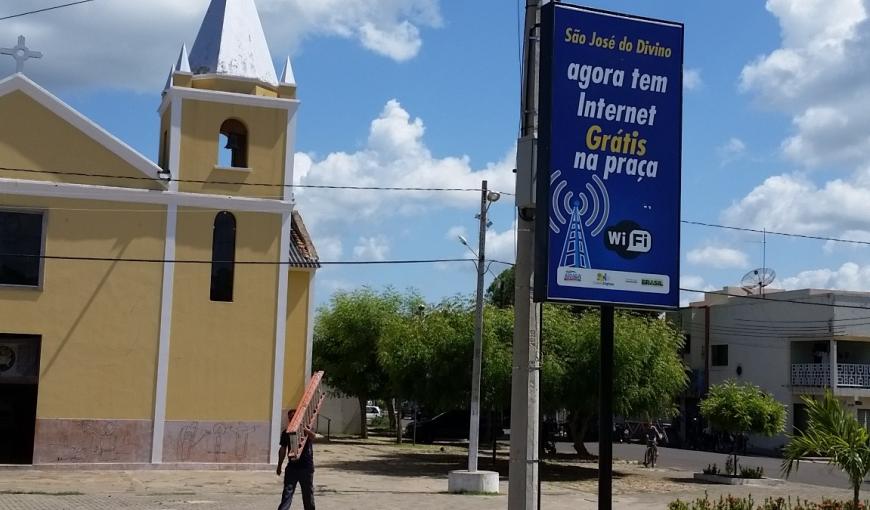 The small São José do Divino in Piauí is celebrating this month. And not only due to the arrival of June. In the heart of an ambitious project by the federal government, conceived to bring broadband services to the countryside, a public access point entered into operation, at the central town square.

The poster placed in the spot informs: “Now you have FREE internet in the square”.

I was there and I saw it with my own eyes. When the sun goes down and the temperature is milder, many people go to the place, cell phones in hand, and connect to the internet.

Local network and equipment were deployed with resources from the federal government. But the output to the outside world was handled by the city hall. As it is a very small town, which represents little return for large bandwidth providers, a connection via radio, with 16 Mbps was the maximum the City Hall could rent. That is, less than the band we have in our homes and we consider too slow.

But it seems that nobody cares about this small detail in São José do Divino. We see the happiness in their faces. It is a joy! As the saying goes, if it is free, then it is for me!

In my view, the biggest advantage is that the city currently has its own optical network, interconnecting points of their interest. Municipal offices, schools, kindergartens, social care centers, police station, hospital and the office of the Bolsa Família (“Family Allowance”) program are all interconnected, and they may exchange gigantic volumes of information among themselves. However, when going into the wild, they must share a portion of the 16 Mbps made available to all.

But the most interesting thing is that every system that innovates also awakens bad moods!

The square’s WiFi, for example, is equipped with a high-gain antenna. Although the contract sets forth a minimum reach within the square, the signal is delivered strongly in addresses up to 200 meters away. Thus, merchants, neighboring residents, the owner of the pharmacy, the owner of the supermarket and the post office manager were overjoyed. They are all seriously thinking in cancelling the services of the local provider and migrating to the prefecture network. In a first moment, at least economically, the most hindered party is the provider.

But among the discontented, I ended up meeting someone nobody could imagine: the vicar of the church of São José, the patron saint of the city.

No one remembered that his place of work faces the antenna. A full signal inside and comfortable benches to sit. Is there a better place to stay? The priest was very mad!

I read with my own eyes a WhatsApp message he sent to the responsible by the network:

“Francisco, I do not want to have to fight with you. Tell them to turn off the internet during mass times. My people is not following the mass properly, or even paying attention to my sermons!”.

Strictly speaking, this not very republican message should receive a resounding no. After all, although the name of the city is linked to a saint, the prefecture is laic and there must certainly be evangelicals and atheists in the square during mass times. But the request was properly addressed...

Machiavelli wrote seven centuries ago: there is not a more dangerous activity, and at the same time, more frustrating than working in innovation. The innovator must live with the indifference of the future beneficiaries and face the hatred from those that shall certainly be affected!

*Joaquim Fanton is an electrical engineer from the Federal University of Paraná (UFPR), with 38 years of experience in optical networks. He was a network engineer of Paraná Telecommunications Company (Telepar) of Telecomunicações São Paulo (Telesp), Telebras and the Research and Development Center in Telecommunications (CPqD). Today, he acts as RNP consultant and participates in the implementation of metropolitan fiber optic networks, under the Digital Cities Programme. By walking through the countryside, he accumulated stories that will be shared on this website.