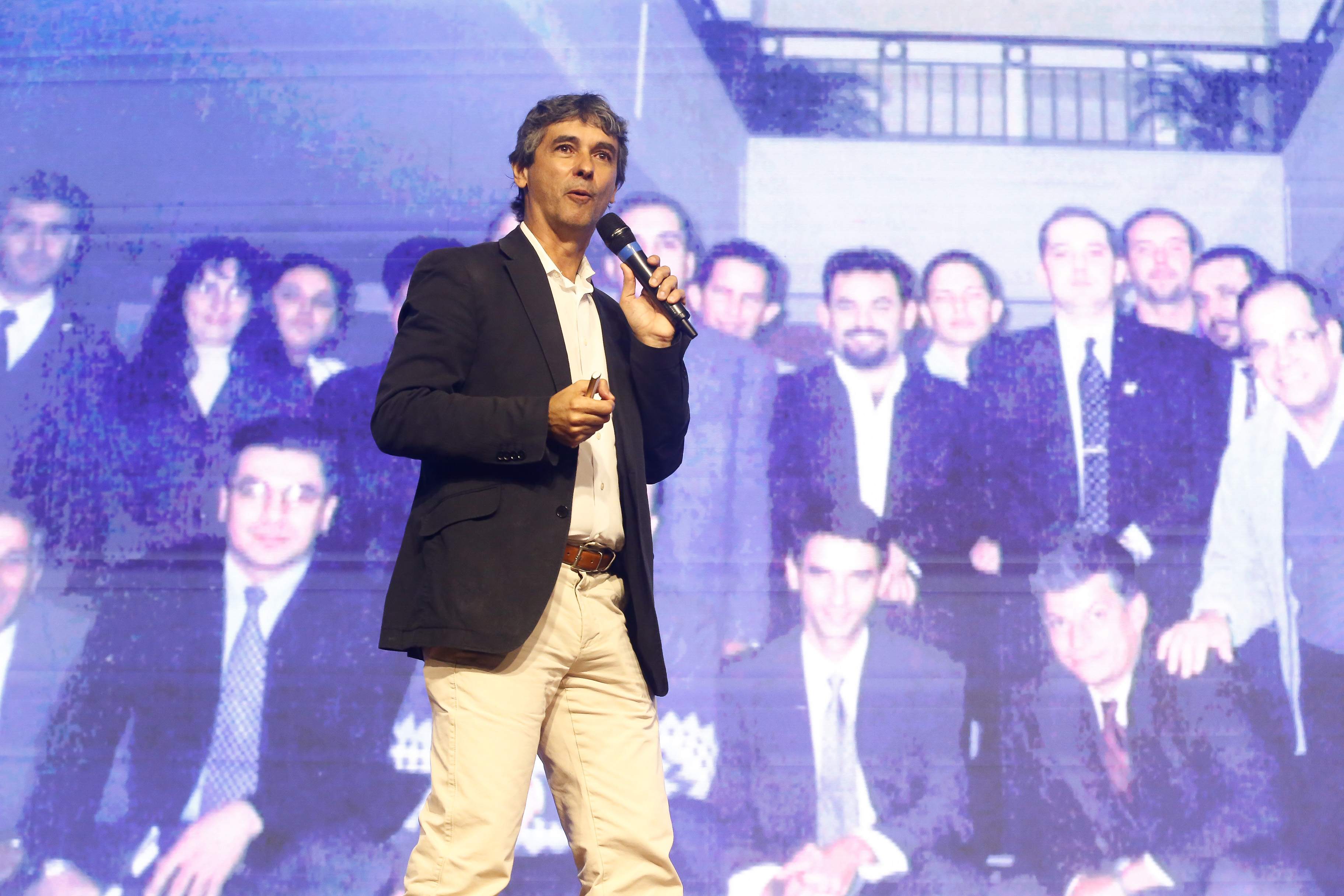 This Wednesday (August 28), the 2019 RNP Forum ended its activities with more than 700 present participants and almost 12 thousand online accesses. During the closure, there was an integrated presentation between musician Moisés Pena, playing the oboe, who was present in the Royal Tulip Alvorada hotel auditorium, in Brasília, together with the Neojiba orchestra, right from Salvador. They played the song “Lago dos cisnes.”

The day highlight was the keynote speaker of 2019 RNP Forum, Ladmir Carvalho. He presented the entire trajectory of 30 years of Alterdata Software, a company created in the city of Teresópolis, in the mountainous Region of Rio de Janeiro and that currently counts with more than 100 bases spread throughout the country, more than 1,600 employees, around 50 thousand clients and more than one million users.

The lecturer told about the transformation cycles through which Alterdata passed until nowadays and emphasized that planning was essential to its growth, in a time when there was no bibliographies on this subject.  To end the presentation, Ladmir emphasized the importance of continuous update of TI professionals.

The last day of the RNP Forum activities began after the Arena Talks, which gave voice to projects submitted by the community. In the session, each lecturer had until five minutes to make their pitch, i.e. to present their project with the aim of raising the audience’s interest.

Check out the selected proposals

Presentations are available in the event website, in the tab Mídias [Media].

In the morning, a panel introduced the most innovative things that have been implemented in the universities to make the campus increasingly more intelligent. The manager of RNP Research and Development, Gustavo Dias, moderated the meeting and Jacir Bordin, from Universidade de Brasília (UnB), and Mauro Bernardes, from Universidade de São Paulo (USP), exposed the solutions that have been implanted, how they have helped in the universities routine and what ideas have been thought for the future.

Leadership and management of people

The leader’s role in Digital Transformation was the panel target on the development of teams at Arena Fórum space. This debate counted with the participation of the coordinator of Standards and Governance of the Digital Government Office from the Brazilian Department of Economics, Anderson Costa, the professor of Universidade Federal Fluminense (UFF), Carlos Nepomuceno, and consultant Rosangelica Coletti. “If we understand that digital transformation means buying more technological equipment, then we will not be promoting transformation. Innovation starts necessarily by people,” declared Anderson Costa.

In the afternoon part, the panel on the digital transformation in education, moderated by head of Services and Solutions, José Luiz Ribeiro, brought government perspectives, represented by the deputy secretary of Digital Government, from the Brazilian Department of Economics, Ciro Avelino, and from the industry, with participation of Djalma Andrade, of Microsoft, on the issue.  “Digital transformation is a tool to reach more efficiency. Digital Government aims to rescue the trust in the relation between government and society. That we understand that society is digital and that we, as part of the government, need to be closer to it,” Ciro Avelino highlighted.

The last auditorium panel discussed on what should be done to demystify the use of cloud for public administration. The head of Relationship with Clients from the Brazilian Government Accountability Office (TCU), Breno Costa, presented data from a research showing that fear of data becoming vulnerable is is the main reason for the small adherence to this kind of storage.

“Even though there has been a major concern on the Cloud importance, current use is low and there is only a few experience in the platform. This context provides a risk overvaluation. Many are afraid of using the cloud due to unawareness. It is believed that they may be liable for something,” he emphasized.

The panel was dedicated to the need of planning by researchers to deal with the new data-oriented science, also called e-Science. For instance, at Fapesp, the researchers were requested a Plan for Data Management in the project submission phase. Check out the initiative:  fapesp.br/gestaodedados.

Use of data as a support to preserve biodiversity was the theme of the panel that ended the Arena Fórum space activities. The table was comprised of the general coordinator of Biomes from the Department of Scientific Development Programs of the Secretaria de Políticas para Formação e Ações Estratégicas (SEFAE) from the Brazilian Department of Sciences, Technology, Innovations and Communications (MCTIC), Luiz Henrique Mourão do Canto; biologist Tainá Rocha, from the Núcleo de Computação Científica e Geoprocessamento at Jardim Botânico, and professor Antônio Saraiva, from the Núcleo de Pesquisa em Biodiversidade e Computação from Universidade de São Paulo (USP).

The SEFAE representative presented the unit strategic programs for biodiversity, including the Sistema de Informação sobre a Biodiversidade Brasileira (SiBBr). “We need to change this knowledge into something that may be proper for the population,” declared the public manager. The panel happened one day after the Atlas SiBBr release, which is a new platform with information of Brazilian ecosystems.

Check out the day photos!