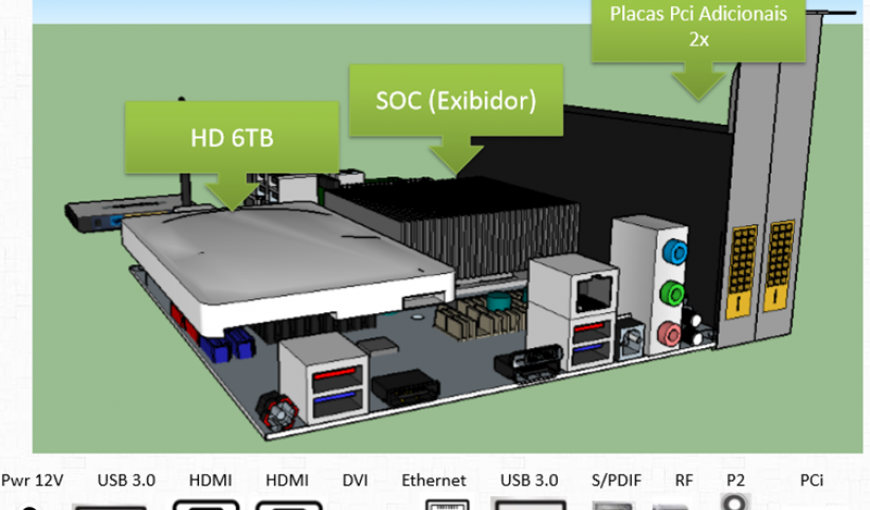 In partnership with Kasco P&D technology, RNP completed the UHD Player Appliance for digital content, a project under the Digital Solutions for Culture Initiative. The equipment is miniaturized hardware capable of displaying videos in 4K, with the highest quality digital audio, besides offering features like wi-fi, Bluetooth and digital TV tuner. There are also several possibilities for the development of the equipment, such as the use of Artificial Intelligence, with applications that can recognize people, as well as their age and facial expression, satellite and conference classes.

UHD Player enables you to tune into satellite channels, allowing remote cities to access multimedia content without the use of the internet, and supports the most diverse conferencing software, allowing communication between schools and universities.

“Each display room now has a kit of equipment that is interconnected and set up to receive and view the content distributed in Cinemas em Rede. The purpose was to develop an equipment that can bring together all the hardware and software components that make up the equipment kit in a single processing unit that will bring benefits considering a future scenario of a large number of rooms to be serviced, with reduced costs, logistic facilities, more simplicity in installation and maintenance, among others”, explains Alexandra Manarini, Business Analyst at RNP’s Services Deputy Management and Solutions (DAGSol).

Kasco, a Solutions Company based in Unicamp’s Laboratories, was selected in a call in 2017 to assume the project, with many technical requirements: reduced hardware size, specific audio, video and data interfaces, and the ability to process existing software, which previously ran in a server environment. There was also a final price target for the units to be produced and a predefined deadline for delivery.

“The occasion was propitious since we were already studying miniaturized hardware and put together a complex and challenging proposal. With highly qualified teams and the partnership of Mackenzie’s Digital TV laboratory and Sator Eletrônica, after the approval of the proposal, the research to identify the main components that would form the hardware began. We performed four-week sprints, which were often short for the number of requirements to be implemented but, together with RNP project management, we validated the path to be covered and flagged all the deviations found. At each end of the sprint, the concept of the project became more solid and robust and with a transparent and objective driving, and we managed to involve and motivate all project collaborators and extract the best from each one. At the end of the 9th Sprint (ninth month), we already had a functional prototype. More than just meeting the needs of a movie theater, there was a concern to extract the full potential of the processor and enable it to run state-of-the-art artificial intelligence algorithms that will design this hardware for use in the next few years”, says John Marcelo von Zuben, from Kasco P&D.

The Networked Cinemas is an activity of the Rede de Cinemas Universitários (Network of University Theaters), an initiative from RNP in partnership with the Ministry of Culture (MinC) and the Ministry of Science, Technology, Innovation and Communications (MCTIC), which intends to contribute to the creation of an audiovisual display circuit in the Universities and Federal Institutions throughout Brazil.