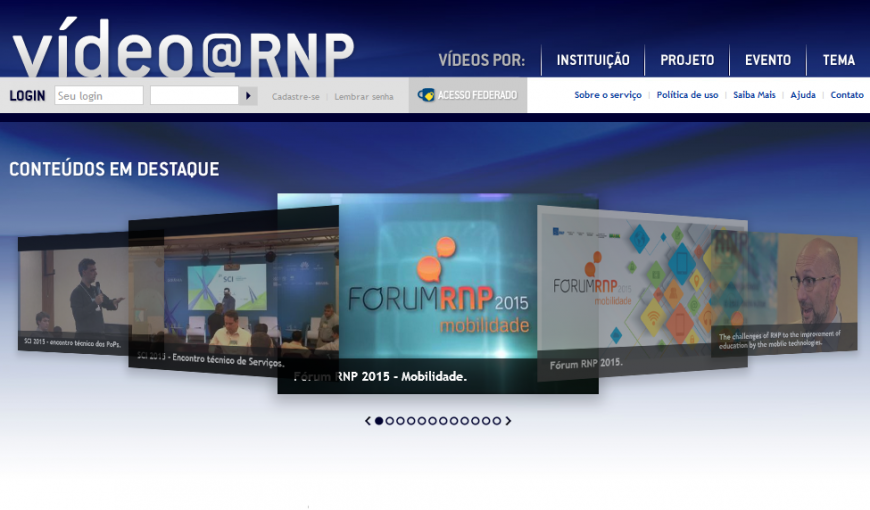 The Video@RNP portal has new functionalities that will improve the user experience. Now, it is possible to add a feed of Twitter (hashtag, timeline, likes and others) in a live broadcast, creating a vide list to future view, access live broadcast and TV channels through mobile devices, etc.

The highlight of this update was the support for mobile devices access (tablets, smartphones, etc.) to the Video Broadcast services, TV Signal Transmission. Until then, this type of access was only possible for Video on Demand. “With this, we believe that this solution is complete, covering the three portal services”, said the Service Manager of RNP, Jean Carlo Faustino.

Among user benefits of Video on Demand, we stress that the file upload resources on formats .mov (Apple), 3gp (smartphone) and WebM (Google); support to replace several video files at the same time; and automatic fulfillment of video title based on file name used on uploading. Only last year, this service received more than 1,500 videos.

The Live Video Broadcast is also very used by customer institutions of RNP, which broadcasted almost 300 events in 2015. These users were served with new functionalities, including the possibility of registering a tag cloud with most commonly used words in scheduling of live video broadcast and adding a feed from Twitter.

Check out the news from Video@RNP:

In addition, there is other infrastructure benefits that, despite not being clear to a final user, make feasible the benefits previously mentioned, namely: