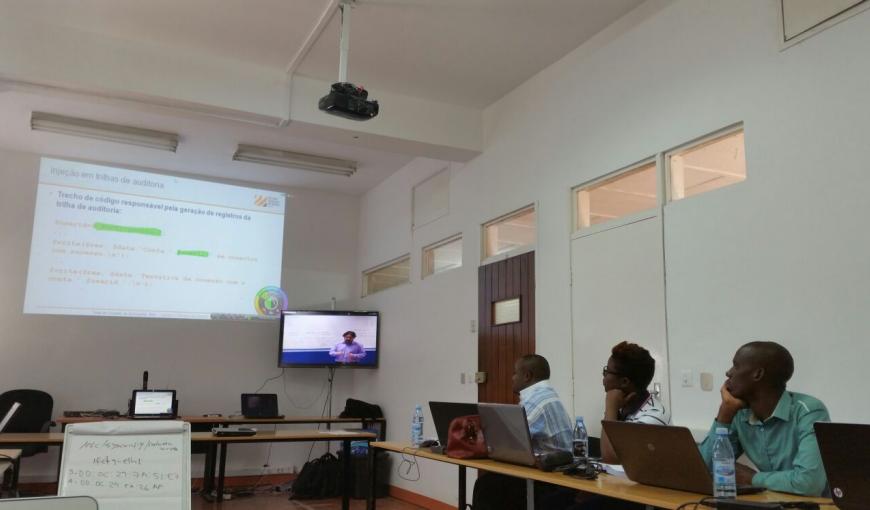 At this week, between 21 and 25/9, the ESR began the IT training for technicians from universities of Mozambique, in Africa. This was the first remote training outside Brazil, with the simultaneous offering a course which was attended by brazilian and african students.

The activity was made possible thanks to the activation of the Networks School training pole in the city of Maputo, in the Mozambican capital, in June. This is the first pole out of Brazil, and it aims to bring knowledge from the Brazilian academic network experts for the African continent. The action is inserted in the scope of cooperation between RNP and the Mozambican academic network, MoReNet.

The theme worked on the course was "Web Application Penetration Testing", also called penetration testing or pentest, used to check the security of an environment, platform or system, by simulating real attacks exploiting the vulnerabilities found. The class consisted of nine students in Maputo and seventeen ones in Porto Alegre.

The classes were ministered by the instructor Afonso Neto, from the Federal University of Rio Grande do Sul (UFRGS), in the Distributed Classes modality, in which the students attending the ongoing face class, while another group participating remotely, with real-time interaction, through audio and video transmission. "This was the first international and intercontinental class distributed. It is a shift in paradigm between the need and supply of knowledge", says the ESR coordinator, Luiz Coelho.

The used software platform was developed by UFRGS in a partnership with RNP, under the Infrastructure Working Group for Distance Education (GT-IEDAD). A complete environment was created for interactive multimedia transmission quality between institutions connected to RNP's network, enabling simultaneous access of several people.

"I believe that the ESR can contribute effectively in the implementation and operation of the academic network in Mozambique. Some african instructors have been in Brazil to participate in the ESR courses. The goal is to replicate and expand in african territory the knowledge that is being acquired", says Luiz.