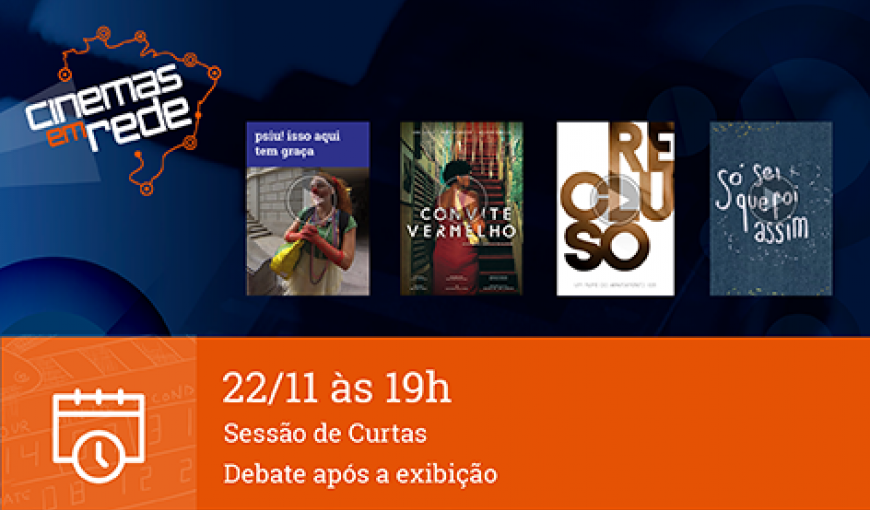 This month of November, Cinemas em Rede brings to the screen several short films produced by students and former students from universities involved in the Project. The productions contemplate four genres: the fiction in “Convite Vermelho”; the animated film “Só Sei que Foi Assim”; the documentary “PSIU! Isso Aqui Tem Graça”; and the contemplating “Recluso”. The show will take place on November 22 (Thursday), starting at 7:00 p.m., and will feature simultaneous broadcast to the theaters of six public universities. The ticket is free.

Directed by João Victor Almeida, the short film “Convite Vermelho” brings an intimate vision on Cristina’s life. In the midst of domestic chores, the character sees her destiny changed after the arrival of a call. The production is the result of the work developed at the Universidade Federal Fluminense – UFF (Federal University of Rio de Janeiro) and also has the participation of the cross-dresser Aretha Sadick.

With a dose of existentialism, Giovanna Muzel’s “Só Sei que Foi Assim” animated film explores environments and stimulates the viewer’s imagination. By including diverse elements in the narrative, the work invites us to reflect on questions and confront our own fears through a poetic plot and colorful images.

Approaching an extremely current theme, the movie “PSIU! Isso Aqui Tem Graça” (2015), by Thaís Alessandra, from the Coletivo Ciranda, brings an insight into feminism through the humor. By means of interviews with some members of the “Coleção Calcinha de Palhaça” from Belo Horizonte, the short film developed at the Universidade Federal de Ouro Preto – UFOP (Federal University of Ouro Preto) shows the disruption of aesthetic standards proposed by female clowns.

“Recluso” (2017) is a short film directed by Laura Souza and Max Assis Souza, which makes deep reflections on solitude. A man who is alone in the living room of his house goes through seclusion until he is able to break the depression of his home and face the outside world. The film was developed at the Universidade Federal de São Carlos - UFSCar (Federal University of São Carlos).

The event is another edition of Cinemas em Rede, an initiative that connects theaters and exhibitors from federal institutions of education, science and culture to RNP (Rede Nacional de Ensino e Pesquisa – National Education and Research Network), creating a national circuit for Brazilian audiovisual production. Also in 2018, a qualification call to survey the situation of exhibitors at universities and federal institutes will be launched to subsidize the expansion of the network throughout Brazil.

Learn more about the project: http://www.cinemasemrede.rnp.br