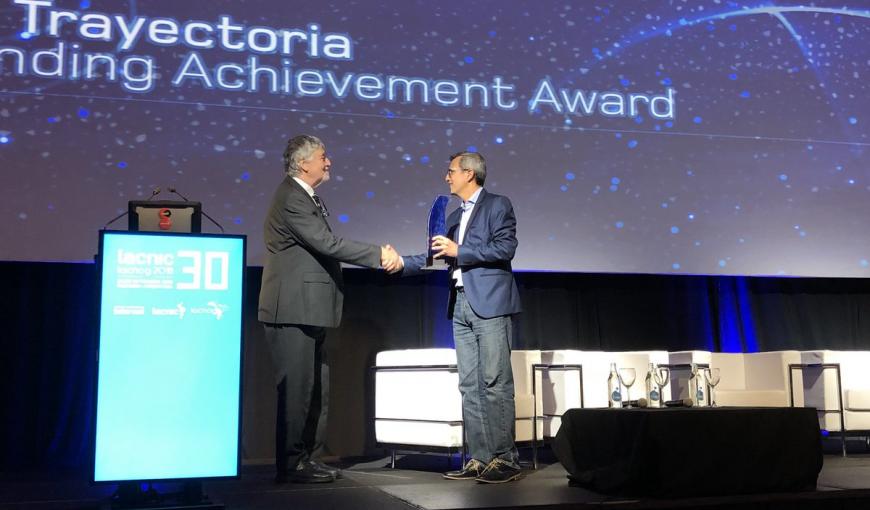 Network scientist and former director of the Brazilian National Research and Educational Network (RNP), Michael Stanton, received the 2018 Trajetória Award from the Internet Address Registry for Latin America and the Caribbean (LACNIC), for its contribution to the development of the Internet in the region. The award was presented at a ceremony held in Rosario, Argentina, on September 27th, during the organization's annual event, which gathers the network operators’ community of Latin America and the Caribbean.

Michael Stanton is the third to receive recognition from LACNIC on behalf of Brazil, after Demi Getschko, advisor to the Brazilian Internet Steering Committee (CGI.br), in 2012; and Carlos Afonso, executive director of the Nupef Institute (Centre of Research, Studies and Training) in 2010. According to LACNIC, Michael, who is originally English, was awarded the prize for his efforts to promote the development of the internet in the region and especially in Brazil.

The Trajetória award was created in 2009 and has since been given to 19 leaders from 13 Latin American countries. The jury committee considers contributions in the fields of internet governance, fostering of the collaborative model, development of technical skills, promotion of the use and development of Internet standards and the promotion of the digital economy in the region.

Michael Stanton served as RNP’s Director of Research and Development between 2002 and 2018. He received a PhD in Mathematics from Cambridge University, and was a lecturer at the Pontifical Catholic University of Rio de Janeiro (PUC-Rio) and Fluminense Federal University (UFF). He has contributed to the academic research in architecture and engineering of computer networks.

From the launching of NSFNET, a network of the National Science Foundation (NSF) that linked universities and research laboratories in the United States in the 1980s, Michael advocated the creation of an academic network in Brazil. The result of this mobilization was the emergence of the RNP project in 1989. Michael participated in the coordination of the RNP project until 1993 and returned to the organization in 2001, as Director of Innovation, and later as Director of R&D.

Among its pioneering projects is the redesign of the internal networks of PUC-Rio and UFF, Rede-Rio (Bitnet and Internet phases), the experimental fibre optic network of the GIGA project and the metropolitan network of Belém, Pará (MetroBel). Michael is currently working on the construction of the new RedCLARA backbone, which integrates Latin American academic networks, and is involved in new intercontinental submarine cable projects.

For more information, visit the website of the Trajetória Award.

Watch the video with the full speech of Michael Stanton: