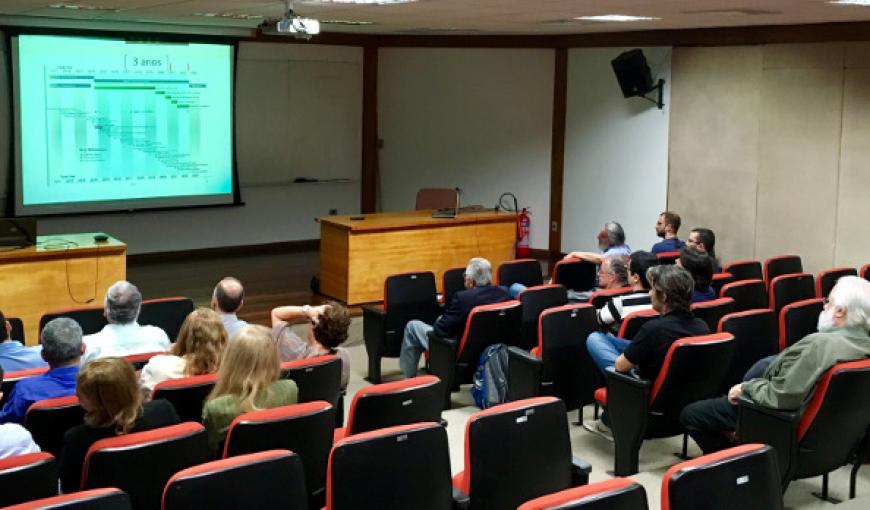 Formally inaugurated in May of this year, the National Institute of Science and Technology of the e-Universe (INCT) is part of the Interinstitutional Laboratory of Astronomy (LIneA) and began its activities up and running. The Institute's Steering Committee implemented twelve scholarships on its first call, confirming its mission to support the participation of Brazilian researchers in major international projects. Supporter of LIneA, the Brazilian National Research and Educational Network (RNP) has also been instrumental in the development of INCT e-Universe activities.

The scholarships were granted aiming to support great scientific surveys as Sloan Digital Sky Survey (SDSS), the Dark Energy Survey (DES), the Dark Energy Spectroscopic Instrument (DESI) and the Large Synoptic Survey Telescope (LSST). The distribution was made through the evaluation of candidates in the scientific and technological areas, following the criteria of the selection commissions that were created.

The Coordinator of the INCT e-Universe, Luiz Nicolaci da Costa, told how the scholarships were allocated within the framework of work. “Of the 12 scholarships distributed, four were allocated to the scientific area, seven to strengthen the team of technologists and one to the area of communication, to assist in the dissemination of the work being done by INCT and LIneA”.

According to Nicolaci, the support of RNP is essential for INCT e-Universe to carry out its activities, mainly in the exchange of information with the diverse partners around the world. “RNP played an important role in the creation of the laboratory that made INCT possible. From a practical point of view, it contributes to improving the transmission of data with our various partners, which is a key contribution. RNP was also instrumental in signing the agreement with the LSST, which allows the participation of 50 researchers in this project”, said.

For this semester, important steps are planned within the projects in which INCT e-Universe operates. In the Sloan Digital Sky Survey (SDSS), a new lot of data will be released to the public (DR14) and there will be a monitoring and maintenance work of the infrared spectrograph data acquisition system mounted on the 2.5 meter telescope at the Las Campanas Observatory, in Chile. On the other hand, the Dark Energy Survey (DES), will be carried out in the LIneA Science Portal for use by the Brazilian team, which will analyze the data accumulated during the first three years of the survey and the first cosmological results will be presented. In August, the fifth and final year of project observations will begin.

The Dark Energy Spectroscopic Instrument (DESI) will support in the review of the Quick Look Framework (QLF) system, which is being developed by LIneA, with the support of postdoctors supported by INCT, to evaluate the quality of the 15,000 spectra and, of the five thousand objects that will be observed every 20 minutes. The first general meeting of the Brazilian Participation Group (BPG), part of the Large Synoptic Survey Telescope (LSST) project, will also be held this semester and is supported by the INCT e-Universe. In it, there will be the discussion about a possible Brazilian contribution in the construction of the operation.

Finally, the installation of LIneA of new cluster ICE X of SGI, recently acquired with INCT funds and the supercomputer Santos Dumont will be used to assess its integration to the scientific portal, and thus, may, reduce the processing time for certain critical processes in the analysis.