This Wednesday (26/1), the connectivity of the land sections between Brazil, Argentina and Chile of the BELLA Program (Building Europe Links to Latin America) was officially inaugurated, a basic infrastructure that directly connects Europe to Latin America through of the EllaLink submarine cable. The event took place via videoconference and was attended by representatives from Latin America, including Brazil, and the European Union.

Connectivity is a historic milestone for the development of science, education, technology and innovation in South America. With 6,070 km of infrastructure, and capacity of up to 600 Gbps, the stretch between Porto Alegre (BR), Buenos Aires (AR) and Santiago (CL) will bring numerous benefits to astronomical research in Brazil and to the Copernicus Program in Chile. The connection will benefit more than 1550 teaching campuses and research centers in Brazil and Chile, paving the way for a future Argentine connection. 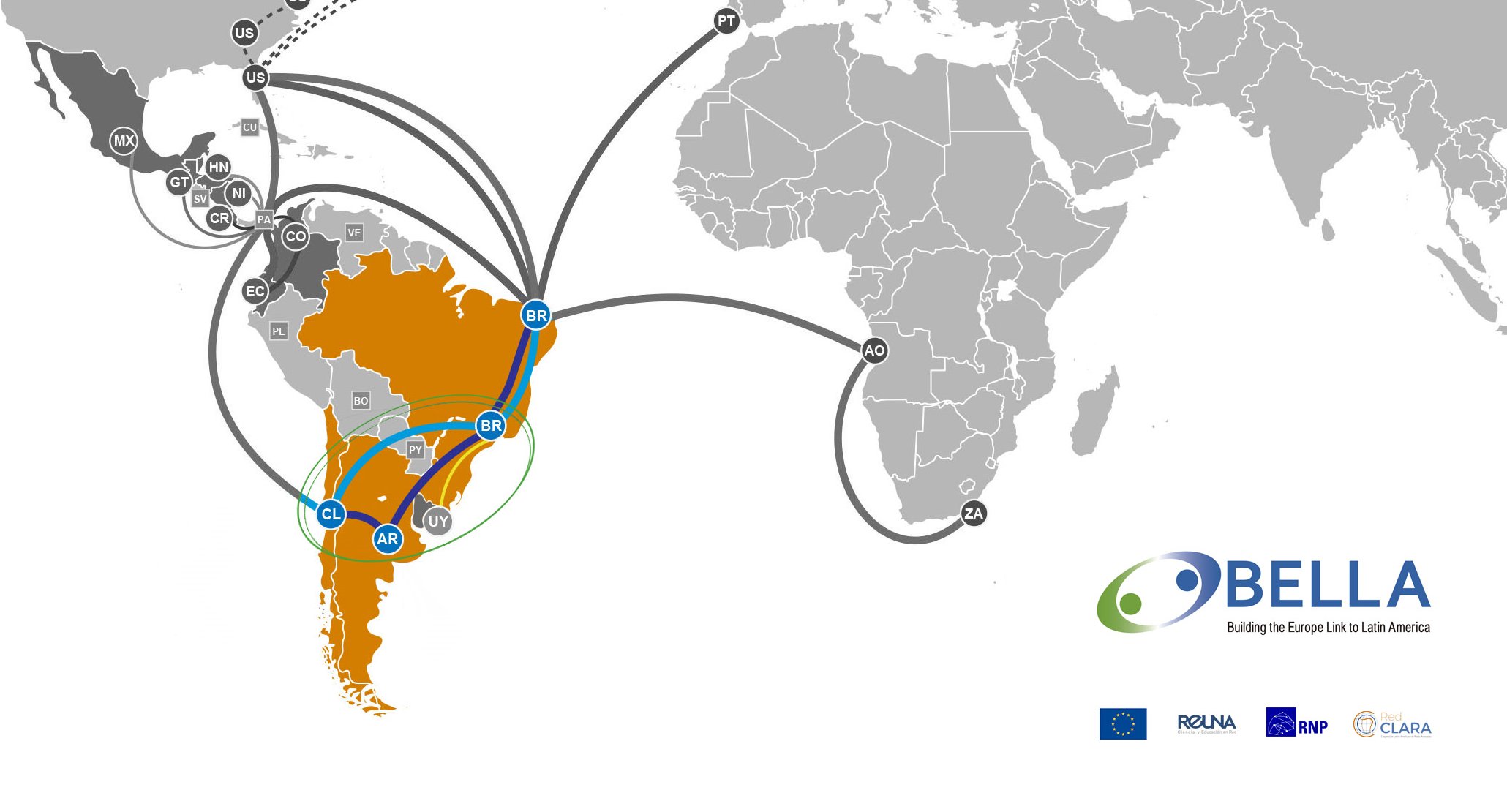 With the new structure, cooperation between European and Latin American researchers and organizations is intensified. In addition, the cable will be of paramount importance for Earth observation services through the European Copernicus satellite, which has a data repository at the University of Chile. Connectivity will allow a greater volume of Earth observation information to be shared at greater speed.

“BELLA represents a great opportunity for our region. I like to imagine that this project is a digital embrace between our countries. It is an embrace that strengthens our historical ties and ties in all areas, including, through RedCLARA and its members, the areas of science, technology, education and innovation, fundamental for our society to develop economically and socially”, said the executive diretor of RedCLARA, Luis Eliécer Cadenas.

The innovation secretary of the Ministry of Science and Technology (MCTI), Paulo Alvim, took the opportunity to congratulate the National Education and Research Network (RNP) for its involvement in the project. “RNP has played a very important role in Brazil, which spills over into our continent, and has fundamentally contributed to the BELLA project. For us, granting greater independence to the exchange of scientific data and more intense and quality communication in our region is strategic, it is the path to a more inclusive and sustainable future. This integration that BELLA will allow us will guarantee a faster and more secure transmission of information”, he declared.

Research networks in Europe, Latin America and around the world, historically, have always integrated institutions and people with emerging technologies, working in advance by the community. But, according to RNP's general director, Nelson Simões, projects like BELLA-T need cooperation for their success.

“This infrastructure would not be possible only with national academic networks. These networks became relevant because they were able to materialize and demonstrate the results of public policies. Without our state governments, which invest in quality education and collaborative research, there would be no emerging technology or organization that would be able to drive science and education for all,” he revealed.

Nelson also attributed the success of the project to the investments of academic networks in the interiorization of their countries, and, in large part, to the collaborators who develop and make their technical skills available along the way.

“Thanks to our extraordinary teams, we were able to share together with Géant and RedCLARA the construction and training of BELLA-T and integrate, as never before, communities from Europe to Latin America. These networks are laboratories that promote the innovative and early use of various emerging technologies, and they are being applied by our organizations in science and innovation projects. I usually say 'If you like the Internet, thank your search network'. All of them are vehicles for the development of new applications, be they data science, cybersecurity or artificial intelligence”, he concluded.