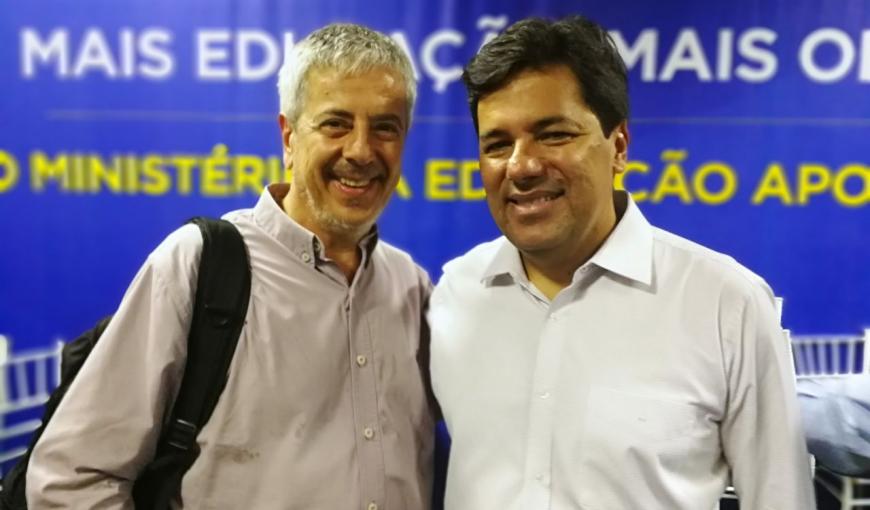 Last Friday (March 16th), the first link of the Ipê network at 100 Gbps, connecting the Points of Presence in Paraíba and Pernambuco, came into operation. The delivery of this first circuit is part of the agreement signed between RNP and the Companhia Hidro Elétrica do São Francisco (Chesf) for the technological evolution of the national academic network, supported by the company's transmission lines. The infrastructure sharing agreement with Chesf will last 20 years and receives investments from the Northeast Connected Program of the Ministry of Education to internalize broadband access for education and research.

The announcement was made on Monday (19th), on the agenda of the Minister of Education, Mendonça Filho, in the city of Gravatá (PE). On the occasion, Chesf's Chief Operating Officer, João Henrique Franklin, highlighted the benefits of the cooperation for the academic community. "More than transmitting electricity through our transmission lines and substations, this partnership represents a technological leap for the Northeast and Brazil, and shows Chesf's commitment to socioeconomic development and quality of life of all", said Franklin.

The first phase of the project, scheduled to be completed in the first semester, includes deliveries of five other backbone links at 100G in the Northeast, on the routes between Fortaleza, Natal, Campina Grande, Recife, Maceió, Aracaju and Salvador. In all, 28 campuses of federal institutions from 19 cities in the rural area of the Northeast will benefit directly from this first phase, with speeds starting at 1 Gbps. By the end of 2019, in the second phase of the project, another 77 cities in the Northeast will be contemplated.

The increase in capacity of the Ipê network in the Northeast also indirectly benefits all the institutions connected to the RNP’s Presence Points in those states with 100 Gbps technology. This very high performance capability can be taken to other locations in the countryside by the optical network projects undertaken by the state governments, with its own resources and in partnership with RNP, with investments from the Veredas Novas Estaduais Program of the Ministry of Science, Technology, Innovation and Communications (MCTIC). The state network of Pernambuco (RePEPE) is already under construction, and the delivery of the first phase is scheduled for June.

Also in 2018, the backbone project at 100 Gbps will be extended to other regions of the country, due to the agreements signed with Furnas and Eletrosul. First, it will reach São Paulo and Rio de Janeiro, and then it will reach other routes served by the Southeast ring, which includes nine states (Minas Gerais, Rio de Janeiro, Espírito Santo, São Paulo, Mato Grosso, Federal District, Goiás, Paraná and Tocantins). By the end of 2019, other 100G links will be operational in the south of the country and in Mato Grosso do Sul, with international connections on the borders with Argentina, Paraguay and Uruguay.

In the North region, the expectation is to meet the RNP’s Points of Presence at 100 Gbps through the deliveries of the Amazonian Connected Program, led by the Brazilian Army, which implants fibre optic cables in the Amazon River basin.