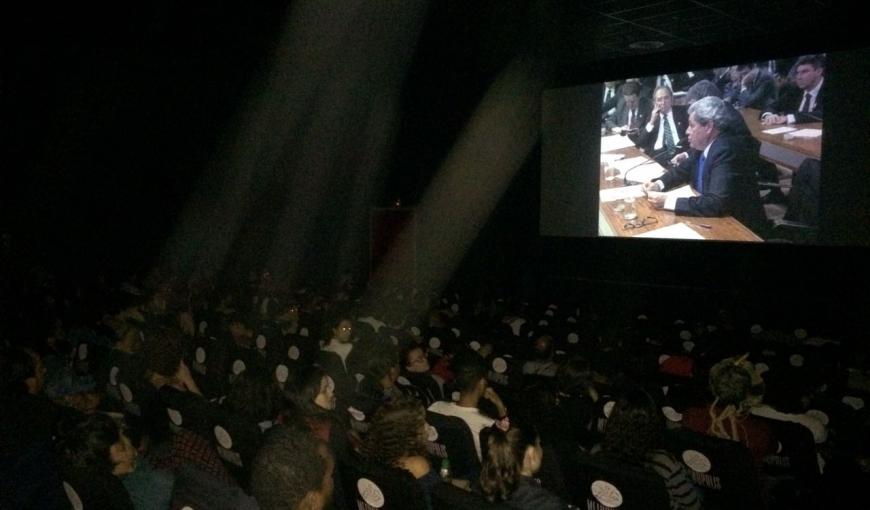 The movie “Martírio” (Martyrdom), screened at the Networked Cinemas session of April 19 was watched by 350 people, across eight universities participants of the project. The screening of the documentary by Vicent Carelli, anthropologist and founder of the project Vídeo nas Aldeias (Video in Tribes), was the result of a partnership with the production company Vitrine Filmes.

The screening of the feature film was followed by a networked debate using the Web conference service (MConf) of the Brazilian National Research and Educational Network (Rede Nacional de Ensino e Pesquisa - RNP), which connected the 8 screening rooms, in addition to the central point in Brasília. Indigenous leaders and researchers from three different states participated in the debate: In São Paulo, filmmaker Vincent Carelli and professor Henri Alencar Gervaiseau of USP; in Espírito Santo, Anthropologist and researcher at the Federal University of the South of Bahia (UFSB) Spensy Kmitta Pimentel and the Guarani leader Marcelo Wera Djekupe; and in Bahia, Pataxó leader and law student at UFBA Genilson Taquari. After the movie, around 270 remained in the rooms of UFG, UFRGS, UFBA, UFPB, UFES, UFPel, UFSCar, and ECA/USP to participate in the debate.

Thanks to the partnership between the Networked Cinemas and the Cineclube Aldeia, an extension project of UFES, Vitória was the city with the largest audience, with a total of 120 people in Cine Metropolis.

According to professor Spensy Pimentel, “RNP’s idea of working with academic exhibitors leads to a number of possibilities to be explored by the universities in the country and, in that sense, it is a vital project that should be extended, because it only brings advantages for the Brazilian film industry.

Networked Cinemas has screening sessions every third Thursday of each month. Entry in the event is free. More information about the project at http://www.cinemasemrede.rnp.br