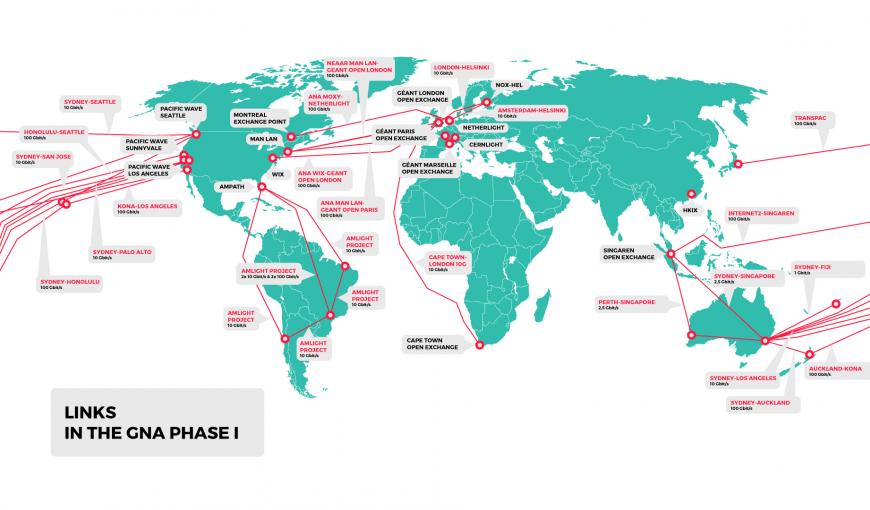 The Global Network Architecture (GNA), developed by an international community of academic networks, seeks ways to make investments in network infrastructures more effective. Brazil participates in this initiative through RNP. GNA aims at defining a reference architecture for academic networks and funding agencies that can support research and education networks initiatives on a global scale.

In 2017, GNA published a set of six documents, called Global Network Architecture Reference v1.0, describing the reference architecture. In addition, it also published three articles, a compliance process for the first deployment phase and a proposal for what would be 2.0 version of the architecture, still in development.

RNP has published a document that describes some trends in international academic communication of interest to Brazilians, and the proposals presented to make such communication more comprehensive, effective and cost-effective. Here are some of them:

Sharing of observatories and scientific labs

One of the great demands of traffic in academic networks is the sharing of observatories and scientific labs, as well as the data observed or generated by them. One example is the use of astronomical observatories in Chile for international projects in the USA, Europe and Japan. Currently, Chile's astronomical capacity will be expanded with the construction of the Large Synoptic Survey Telescope (LSST), scheduled to start operating in 2021, and several optical and radio telescopes belonging to the European Southern Observatory (ESO).

International collaboration in the acquisition of submarine cables

Investments acquiring of new communication infrastructures, especially submarine cables, require more and more international collaboration. In order to ensure access of European scientists to Chile's observatories, as well as to the Kourou space base in French Guiana, the Bella (Building European link to Latin America) project was launched, which aims at providing a direct high-capacity connection between Portugal and Fortaleza, Ceará. This connection will be made by the future Ellalink submarine cable, which will be extended by land connection to Chile and other countries in Latin America, through the Brazilian territory, to the border with Argentina.