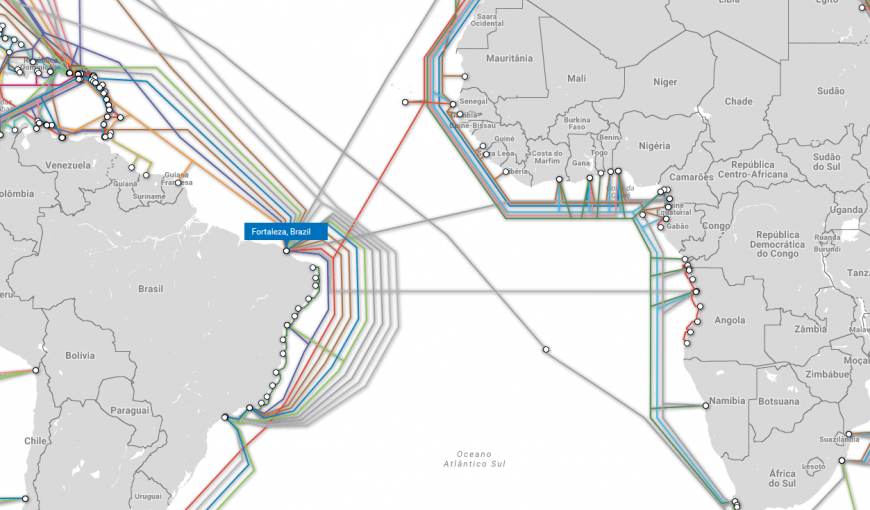 With internet installed in 116 of 184 cities, Ceará maintains its leadership as the state with the largest public broadband network in the country. With beginning in 2010 by the state government, in partnership with RNP, the project Digital Belt of Ceará (CDC, in Portuguese) promoted the installation of a fiber optic ring passing through the capital and the countryside, extending over more than 3,500 kilometers. By the first half of 2017, a new expansion of this infrastructure should be started for another 26 cities, with investments of R$ 6 million that will be afforded by the Ministry of Science, Technology, Innovations and Communications (MCTIC).

Currently, the state is preparing for even greater connectivity challenges with the arrival of six new international cables passing through Fortaleza, as EllaLink, the first submarine cable with technology of 100 Gbps connecting Brazil directly to Europe, and Sacs, an Angola Cables enterprise that will link Fortaleza to Luanda in Africa, both expected for the end of 2018.

In order to take advantage of its privileged position as an international telecommunications hub, the state government, through the Information Technology Company of Ceará (Etice), created the Cloud Innovation Pole project to attract Internet service providers, datacenters and startups of the area and, thus, promote a cloud-computing ecosystem of innovation. “Nothing more reasonable than considering our geographical position of confluence of submarine cables, we become an ideal place for the construction of an industry that uses this competitive advantage. Currently, we already have large datacenters installed and others to be installed in the state of Ceará and we must attract even more”, said the president of Etice, Adalberto Pessoa.

According to Etice, the state is pioneer in replacing its IT infrastructure by contracting cloud services in its public agencies. “As a first step, we are creating an innovative contracting model for cloud services, based on credentialing service providers, aimed at the structured migration of all applications and services relevant to the government for the cloud”, said Pessoa. It is expected that the first accreditations will occur in February 2017.

On the other hand, companies must, within 24 months, provide the cloud services using local datacenters, within the very state. “We want to attract content in a sustainable manner and that the datacenters are in Ceará, so that this strategic potential is established continuously”, emphasized Etice IT director – Pablo Ximenes – who highlighted another competitive advantage of Ceará: the excess of renewable energy, both solar and wind.

The government of Ceará, in order to achieve this partnerships, will have the support of the City of Fortaleza, which has launched the Support Program for the Development of Technological and Creative Parks of Fortaleza (ParqFor), which offers tax incentives to attract companies to settle in the city. The prospect is that Praia do Futuro, a gateway to underwater cable installations, will receive a technology park aimed at companies in the Information and Communication Technologies.

With beginning in 2010, the Digital Belt project was made possible by the installation of the first optical ring brought to the state by RNP, the Fortaleza metropolitan network (GigaFor), during the implementation of the Research and Education Community Networks Program (Redecomep, in Portuguese). With costs amounting to R$ 2,000 megabyte and low quality of access, in most cities via radio, the solution found by the public authority to expand the network already installed in universities was to encourage competition and subsidize the installation of fiber optics in a direct agreement with local authorities.

Today, the Digital Belt of Ceará is shared by Etice, RNP and private providers. The fiber-optic ring serves 90% of internet service providers in Ceará, reducing the megabyte cost by half. This was reflected in the low costs of Internet services offered to the population and a greater democratization of the access to the broadband, since 1.5 million of Ceará citizens now have internet of quality and at a speed twice superior. Totaling, 95% of the cities are served by this optical network, including the mesh of state public agencies, such as departments, hospitals and schools.

With the greatest network capillarity in the countryside, the Digital Belt enabled students, teachers, researchers and employees of the Federal Institutes (IFs), State Institutions (IEESs) and Federal Higher Education Institutions (Ifes) of Ceará, as well as research units to also be benefited. The State is the first to reach the goal of RNP's Veredas Novas program, which is to internalize the academic network, aiming to connect all campuses of educational and research institutions that are far from the major centers to at least 100 Mbps.