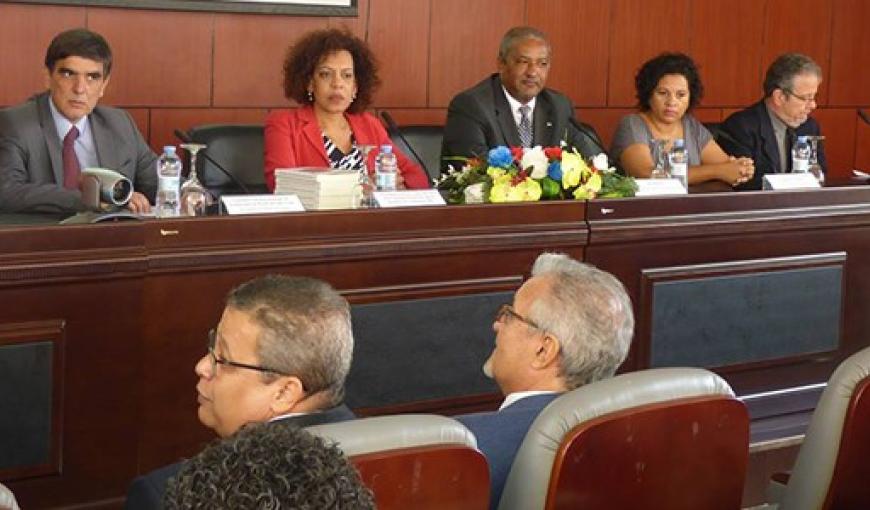 On October 15, Brazil transferred the Pro Tempore Presidency of the Health Agenda of the Community of Portuguese Speaking Countries (CPLP) to Cape Verde. The symbolic act was carried out during the Opening of the 1st Meeting of Human Milk Banks of CPLP, in the City of Praia, in the African country.

The ceremony was attended by the Coordinator-General for Technical Cooperation with CPLP, Alessandra Ambrósio, the Representative of the Advisory for International Health Affairs of the Ministry of Health of Brazil, Luciano Queiroz, the Coordinator of the Human Milk Bank of the Instituto Fernandes Figueira Fiocruz (Fernandes Figueira Fiocruz Institute) and SIG BLH Rute, João Aprígio Almeida, the Minister of Health and Social Security of Cape Verde, Arlindo Rosário, the National Director of Health of Cape Verde, Artur Correia and the Director of Telehealth at the Ministry of Health and Social Security of Cape Verde, Vanda Azevedo.

In his speech, the Cape Verdean Minister expressed enthusiasm and said that the country, with determination and responsibility, will seek to honor and fulfill the commitments made by the Ministers of Health in the Strategic Plan for Cooperation in the Health Field, approved in October 2017.

“Undoubtedly, there is a world of opportunities waiting for us. We are convinced that telemedicine will contribute particularly to joining our countries, enabling better training of our health professionals and will also be an important instrument for improving the delivery of health care and specialized care”, said Rosário.

The National Director of Health of Cape Verde, Artur Correia, undertook to reinforce the existing technical cooperation between the members of the CPLP.

“We will use information and communication technologies to join our countries and strengthen the technical cooperation existed so far. We will work on the continuity of the thematic and technical networks that already exist, but we will also introduce new challenges aimed at this great goal, which is to eliminate barriers to universal access to health, even at a distance, using new technologies”, explained Correia.

According to Luiz Ary Messina, Coordinator of Rute Rede Universitária de Telemedicina (Rute Telemedicine University Network) and Member of the Permanent Work Group on Telemedicine and Telehealth of the CPLP, the fact that Cape Verde is President pro tempore of the CPLP is extremely important to strengthen the relationship and collaboration among member countries.

“The practice of Telemedicine and Digital Health as it has been practiced in Cape Verde, Portugal and Brazil, as a service of teleassistance, telediagnosis and also remote training, involving experts in the areas, clearly demonstrates what can and should be done, paraphrasing Artur Correia, to facilitate universal access to health. The integration of experts in key case discussions, taking place in Rute through Special Interest Groups (SIGs) for 10 years, in about 50 specialties, is also a great opportunity to expand research and training for residents, students and professionals. The integration of the CPLP Countries’ International Network of Education of Health Technicians (RETS) is also another valuable alternative. The launch of the National Telehealth Program of Mozambique on June 18, 2018, under the coordination of Bernardina Gonçalves, who will also be in November this year at the IV RETS Meeting in Rio de Janeiro, represents an extremely important event in the integration of the actions from the Group of Permanent Work of Telemedicine and Telehealth of CPLP”, said Messina.