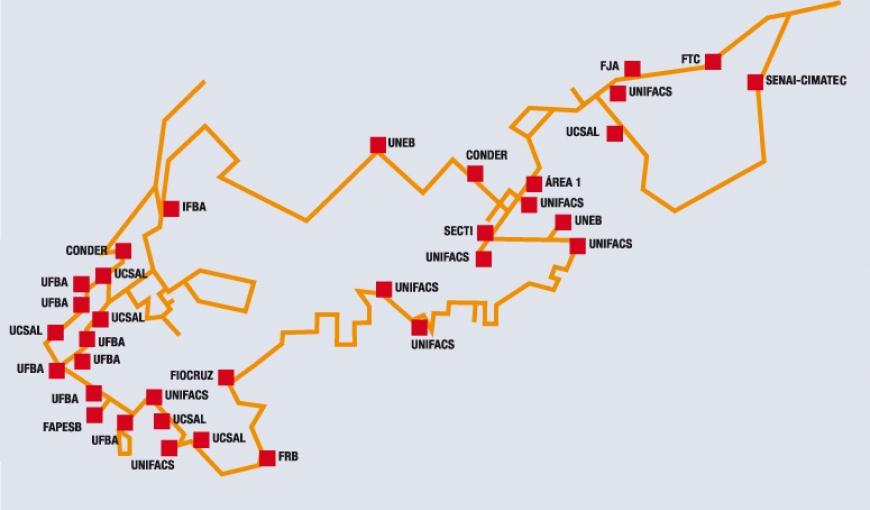 The Brazilian National Educational and Research Network (RNP) and the Federal Data Processing Service (Serpro, in portuguese) have signed an agreement that will allow the expansion of the metropolitan network in the capital of the State of Bahia, Salvador, also known as Remessa, by 25 kilometers in extension.

The commitment was made in December and the endowment, of R$ 518 thousand from Serpro, took place in April, which allowed the implementation works to begin then. This investment will fully fund the implementation of Remessa, which shall from then on serve the Suburban Hospital and the Anísio Teixeira Institute, increasing its capillarity and improving its availability for the current and future user institutions.

In contrast, with the investment, Serpro shall be able to serve, with optic fiber, the offices of the Presidency of the Republic at the Aratu Naval Base, in the capital of the State of Bahia, in addition to 13 other points of interest throughout the path of Remessa. The agreement with RNP shall also allow the company to cut costs with contracting Internet links.

“Serpro will make use of two optic fiber pairs, that is, four fibers, throughout Remessa’s existing path, in contrast for its investment in the expansion of the network. This is the first investment out of the ones set out in the first instrument of adjustment to the cooperation agreement with RNP, which shall also benefit the metropolitan networks of Pelotas (State of Rio Grande do Sul) and Porto Velho (State of Rondônia). Remessa and our Network Engineering Management are already working on this expansion in Salvador”, said the RNP’s Engineering and Operations Director, Eduardo Grizendi.